Too few people in CervicalCheck managing too many projects, rapid review finds 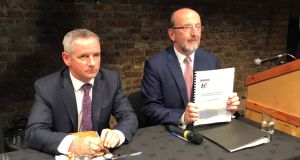 President of DCU Prof Brian MacCraith (right), alongside HSE director Paul Reid, found that the almost total reliance on a single international supplier of laboratory services for the CervicalCheck national cancer screening programme was a source of ‘significant fragility’ for the programme. Photograph: Michelle Devane/PA Wire

The contract awarded to US-based Quest Diagnostics laboratory to deal with the backlog of cervical smear tests was given without proper due diligence or risk assessment, a review has revealed.

President of DCU Prof Brian MacCraith found that the almost total reliance on a single international supplier of laboratory services for the CervicalCheck national cancer screening programme was a source of “significant fragility” for the programme and there was a gross underestimation of the scale of the problem.

And he warned that too few people within CervicalCheck were managing too many projects.

His rapid review, commissioned on July 15th and published on Tuesday, was established after it emerged that the HSE was aware that more than 800 women and their GPs had not been informed of their smear test results because of IT failings and human error. And in 3,215 cases results went to GPs but not to the women concerned.

HSE chief executive Paul Reid said a process was under way to inform all women affected and this was expected to be completed in the next few weeks. He stressed that these were designated “low risk cases”.

“I really regret and apologise it happened to the women. I wish it was different,” he said as he pledged to develop a culture of “putting women first”.

The organisation 221+ which represents women affected by the original CervicalCheck controversy said it was a relief that the clinical risk was deemed low for the women affected by this specific failure. But it said: “It is clear that there was an inability to ‘join the dots’ as far back as January of this year and that there is still a gap between best intentions and effective delivery.”

The report found a decision was made not to communicate with women about the IT problems for six months and Prof MacCraith highlighted the frustration of women “not only by delays in receiving their results but more so by the lack of any clarifying or contextual information”.

At the launch of the report for the HSE, he asked what it said about the system that women had to seek their own information through parliamentary questions.

Expressing concern that there was no proper due diligence done before Quest Diagnostics undertook the additional tests, Prof MacCraith said the laboratory was approved for testing but the problem was with the lack of checking and validating that the Quest IT system could be seamlessly integrated into Irish operating processes.

A new tracking system is to be established to allow women follow the progress of their smear tests to their conclusion. The HSE has appointed management consultant Celine Fitzgerald as interim chief executive of CervicalCheck.