Tánaiste Leo Varadkar has apologised in the Dáil for his error of judgment in releasing a confidential document agreed with the Irish Medical Organisation to a rival GP group last year. 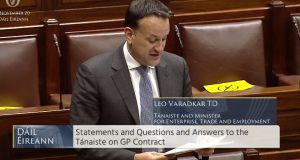 Tánaiste Leo Varadkar has apologised for “errors of judgment” after he released a confidential document negotiated with the Irish Medical Organisation (IMO) to the president of a rival GP group last year.

Mr Varadkar also rejected as “false and without foundation and deeply offensive” any suggestion that he had anything to gain personally from the disclosure.

He was addressing the Dáil on the controversy after he admitted he sent the draft agreement of a new GP contract to the National Association of General Practitioners (NAGP).

The organisation was outside the talks process on the new €210 million contract agreed with the IMO and the controversy erupted on Saturday after an article was published in Village magazine about the disclosure.

The Tánaiste said he had not yet decided if he would sue Village magazine over what he said were defamatory claims that he had committed a criminal act in disclosing the report. “Suing them would be like suing someone on Twitter,” he added.

He said there were innuendoes about his relationship with president of the NAGP Dr Maitiú Ó Tuathail, a friend, to whom he had sent the document.

“We all know what the innuendo is,” he said. “I know what’s being said and it’s not true.”

During a two hour statement and question and answer session, Mr Varadkar said he had “unfinished business” from his time in the health portfolio.

“I wanted to use the influence of the taoiseach’s office to secure a new contract with GPs, to reverse the [austerity era] Fempi cuts in return for a commitment to provide better services in the community for more patients free at the point of use.”

He said rivalry between the two organisations was “often bitter” and made it difficult to reach agreement.

Mr Varadkar was deeply engaged and interested in the talks on a new GP contract. The NAGP wanted to be at the table but the then government decided to negotiate with the IMO alone which the opposition had criticised, he said.

“We committed, however, to keep the NAGP engaged, involved and informed as to the progress and outcome of negotiations.”

He kept “in personal contact with a number of GPs who I felt were opinion leaders through all of this”.

Agreement was reached with the IMO on April 3rd 2019 following lengthy negotiations and the financial details were released by the IMO two days later.

He said he posted the document to Dr Ó Tuathail between April 11th and 16th 2019 on a confidential basis believing that it would be published in full imminently.

At this time in April 2019 the NAGP claimed to have 1,200 members, he said. He told TDs that “little would get done” without informal contacts. “And we all know it,” he said adding that there was nothing inappropriate about such contacts.

He also said that “sometimes people like to exaggerate the nature of their relationships, to inflate their own influence, or to claim to speak for a person when they do not”. He said “this is clearly a big part of this story”.

Mr Varadkar said that Dr Ó Tuathail was a friend but “we are not close friends”. He said they would meet two or three times a year on “overlapping social events”. They were “not best mates” and Dr Ó Tuathail was “clearly overegging it” on the extent of their friendship.

The Tánaiste also said that provided the NAGP “with the information did not confer to them any advantage on the IMO or anyone else”.

However, he said he regretted that he did not provide the document in a more appropriate, formal manner. “It was an error and one I accept sole responsibility for.”

“I know this caused people to question my judgment but I hope having heard my explanation no fair-minded person will question my motivation or integrity. I do regret it and I am sorry for the controversy and the annoyance that my actions have caused including to members of the medical profession, members of the IMO, my colleagues in government and to the House,” he said.

“I know I have made mistakes as a minister and when I was Taoiseach and I have tried to learn from them ... over my career I have been guilty of errors of judgment but I have never been motivated by a desire for selfish financial gain or motives corrupt, not for a minute.”

He said he was trying to achieve the best result and was motivated by “the best reasons”.

Mr Varadkar told Sinn Féin finance spokesman Pearse Doherty that he gave the document to Dr Ó Tuathail because he was president of the NAGP rather than because he was a friend.

Asked why he would give a document that was not completely tied down to a friend in a rival organisation, knowing that the document was confidential, Mr Varadkar said he gave it to Dr Ó Tuathail on a confidential basis because he wanted the NAGP to be on board and to support the negotiations.

“This is a favour for friends and I don’t buy your analysis,” said Mr Doherty.

Mr Varadkar said he had spoken to Dr Ó Tuathail on three occasions over the weekend. The first time he spoke to him was to find out what the story in Village magazine - which revealed the leak on Saturday - was about and on the second occasion to determine the date on which he had sent the document to him. The third time Dr Ó Tuathail contacted him to ask if the NAGP should issue a statement and he replied that was up to the NAGP.

Aontú TD Peadar Tóibín said “your actions were unethical, underhand and deceitful” and may have been illegal.

Mr Varadkar was silent for several seconds when Mr Tóibín asked if he had ever leaked confidential Cabinet information and then said “nothing of this nature”.

Independent TD Mattie McGrath referred to the Tánaiste’s remarks that he was not close friends with Dr Ó Tuathail but there was a photo of the two of them at a march.

Mr Varadkar said that was at a Pride march. “We all know what the innuendo is,” he said. “I know what’s being said and it’s not true.”

The Tánaiste rejected a claim by Independent TD Catherine Connolly that he “bought off” a major campaign of opposition to Fine Gael in the European and local elections threatened by the NAGP. He said they wanted to do the right thing.

At the end of the debate, Minister for Further Education Simon Harris intervened to say he wanted to clarify messages relating to him from Dr Ó Tuathail that had been released.

In response to a request for a copy of the new GP deal, made before Mr Varadkar had passed it on, Mr Harris told Dr Ó Tuathail he would: “Make inquiries on that” and suggested: “Let’s grab a coffee soon”.

Mr Harris told the Dáil “I afforded somebody a courtesy of a response” and said the only inquiry he made was to ask if the report would be published on the Department of Health website. “And I don’t believe I ever had coffee” with Dr Ó Tuathail, he added.

Earlier the Dáil was told Mr Varadkar had not leaked any documents before or since he gave the confidential contract negotiated between the last government and the IMO to the rival GP group.

“He hasn’t done anything like this before or since,” Taoiseach Micheál Martin said of Mr Varadkar’s decision to send the contract to the NAGP in April of last year.

“You’ve essentially given him a clean bill of health. You have said these are matters of not best practice. Weasel words if ever I heard them,” she said.

Labour leader Alan Kelly repeatedly asked Mr Martin if he planned to sanction the Tánaiste, but the Taoiseach did not respond.

During leaders’ questions Ms McDonald said the leaking of the document was not motivated by the public interest. She said the move was “giving a dig out to a friend” whose organisation was in competition with the IMO for their “members, their subscriptions and influence”. The NAGP subsequently collapsed and went into liquidation in July 2019.

She said it was clear that Mr Varadkar “abused his position as taoiseach”.

Ms McDonald asked when the Tánaiste told Mr Martin that he had leaked the document. She wanted to know when Mr Varadkar obtained the document and if he informed any officials about this.

Mr Martin said he had asked his department’s secretary general to check what documentation was there in relation to the issue. He said there was only one letter from the NAGP which related to its concern about the removal of medical cards from patients in a primary care reimbursement service.

He said Ms McDonald seemed to believe there was voluminous correspondence but there was none and he called on her to withdraw a remark that he had refused to publish documents. He claimed she was “trying to create the impression that I have something to hide”.

She asked “how you arrived at the conclusion that there was no criminality involved, nothing to see here bar the failure to use best practice”.

Mr Martin asked her “have you asserted criminality”, adding “you need to make up your mind”.

The Taoiseach said the Tánaiste phoned him on Saturday about the matter. He added that he had no involvement with the last government.

“I have given nobody any clean bill of health,” Mr Martin said.

Mr Kelly said the issue needed to be dealt with quickly because the public was drawn back to “times of golden circles and the Galway tent and friends in high places and all that and we’d thought it had all gone”.

Mr Kelly repeated his call for the Taoiseach to sanction the Tánaiste.

Mr Martin said his concern was that there should be full accountability to the House and that Mr Varadkar would provide this.