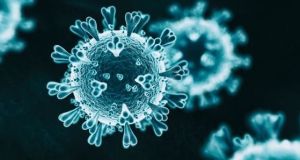 As of 2pm on Monday, 341 Covid-19 patients were in hospital. This is the highest figure since May 20th.

Hundreds of health service staff become unavailable for work every week due to Covid-19 infection or being a close contact of a case.

Some 108 healthcare workers tested positive in the week ending October 18th, according to figures provided by the Health Service Executive (HSE).

A further 326 healthcare workers were reported as close contacts in the same week, the HSE said.

Of the 108 index cases, 62 were reported by HSE occupational health departments and 46 worked in voluntary hospitals.

Those affected included 58 working in acute hospitals, 12 in primary care and six in mental health.

Some health staff regarded as essential to critical service needs but who are contacts can get a derogation to return to work early.

A further 939 confirmed cases of Covid-19 were reported by the National Public Health Emergency Team (Nphet) on Monday. This brings to 58,067 the total number of cases of the disease in the Republic.

Three new deaths were reported by Nphet, bringing the total number of deaths to 1,885.

Some 66 per cent were under 45 years of age and the median age of cases was 32 years.

As of 2pm on Monday, 341 Covid-19 patients were in hospital. This is the highest figure since May 20th.

Dublin has an incidence of 258.1 while Tipperary has the lowest incidence at 139.1

There were 39 patients with the virus in ICU on Monday night, up two on the previous day.

The five-day moving average of virus cases has fallen for a fourth day in a row, according to the latest epidemiological report from the Health Protection Surveillance Centre (HPSC).

The HPSC recorded 13 deaths over the past two weeks, along with 21 admissions to ICU.

There are now 342 patients in Northern Ireland hospitals receiving Covid treatment, with 39 in intensive care units and 30 on ventilators.

Meanwhile, the head of the Catholic schools sector in Northern Ireland has warned against any extension of school closures in the North.

While more than half of all Northern Ireland schools have experienced at least one Covid-19 case, Gerry Campbell, chief executive of the Council for Catholic Maintained Schools (CCMS), said on Monday that every effort must be made to ensure all schools open next week.

As part of a mini-lockdown recently announced by the Northern Executive, schools were closed for two weeks to include the one-week midterm Halloween break while much of the hospitality sector shut down for four weeks.

Recent figures showed that out of Northern Ireland’s 1,035 schools, at least one Covid-19 case was reported in 519 schools.

On Monday the PSNI reported that since March it had issued 3,118 fines and warnings against people for breaching the coronavirus regulations. These included 45 fines of £1,000 (€1,103) for failure to self-isolate.