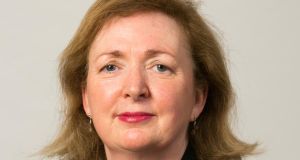 Public health doctor Dr Ina Kelly. ‘The contract under which I work does not reflect the role I am doing.’ Photograph: Shane O’Neill

Public health doctors are at the frontline of the national fight against Covid-19, working seven days a week on complex cases and transmission chains in nursing homes, schools and factories, says Dr Ina Kelly.

Kelly, who chairs the Irish Medical Organisation’s health committee, strongly supports demands for an end to the long-running battle by public health doctors for consultant status.

“This is the vital work that is required to identify the source and stop the spread of the disease. In many countries, public health medicine is valued,” she says.

Doctors trained to specialist level elsewhere are recognised and respected keeping their communities safe, Kelly says: “In Ireland, the role has tended to be overlooked and ignored, undervalued and disrespected.”

Having graduated from University College Dublin in 1986, Kelly completed her general professional training in Ireland and the UK followed by GP training in Western Australia.

On her return to Ireland, she began work in public health, completing a number of extra qualifications, including higher public health specialist training in 2010.

The unfairness in pay grades is, Kelly says, “most obvious at the top of the scale”, where those at the highest levels in public health bring specialist training to the table, but do not qualify for consultant grade.

“I was required to complete higher specialist training (HST). In other jurisdictions, a public health doctor who completed HST would be employed as a consultant.

“Not in Ireland. As a result, the contract under which I work does not reflect the role I am doing and is not on a par with my consultant colleagues in other specialities,” she said.

The lack of consultant recognition has consequences, she argues, since it displays “a wider disrespect” by the State for the role of public health in the health services.

“We have been seeking to reverse this situation for almost 20 years but with no success. Experts who have examined the area agree with our view,” she says. Two government-commissioned documents, the Crowe Horwath report and the Scally Report, both called for public health specialists to be recognised as consultants.

“That disrespect is deeply demoralising to the current generation of public health doctors. More worryingly, it discourages the next generation from even considering public health in Ireland as a speciality worthy of their attention,” she says.

Already, the State has fewer senior public health doctors than other similar-sized countries. Ireland has 60, yet Scotland and New Zealand employ 179 and 169 respectively – and all at consultant level.

Given the pandemic, public health services globally will be recruiting talent: “We will lose the best and the brightest of the next generation of leaders to other countries if we don’t address this now,” she says.

Public health doctors have supported reforms during long and “tortured” negotiations with the Department of Health, but that is “with the caveat that those already working are awarded consultant status immediately”.

“There is absolutely no obstacle to the State doing this. What is lacking is the will to resolve this matter. [The] Government is seeking to again disrespect myself and my colleagues,” she says.

Accusing the Government of yet “another delaying tactic”, Kelly says: “If we proceed on this road there will be fewer and fewer specialists working in Ireland. That long abused delaying tactic and our patience has simply run out.”

“It is time that the State gave us its full support rather than what now seems its increasingly hollow applause,” she says.