Two more deaths and 767 further infections confirmed in the State 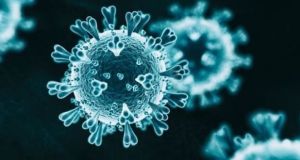 A further 493 new cases of coronavirus were confirmed in Northern Ireland on Monday. 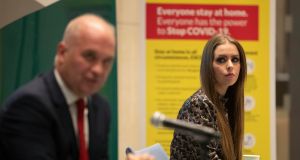 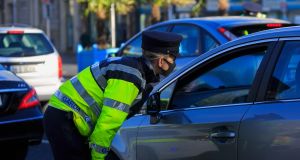 A garda speaks to a car’s occupants at a checkpoint on O’Connell Bridge in Dublin as Level 5 restrictions against Covid-19 continue to be enforced, on Monday, November 2nd. Photograph: Collins

Public health officials have expressed concern over “stubbornly” high Covid-19 figures in Dublin, despite six weeks of restrictions in the capital.

The National Public Health Emergency Team (Nphet) has not seen as big a reduction in cases in the capital as it would like, according to chief medical officer Dr Tony Holohan.

Earlier restrictions put in place in Dublin in late-September, when the capital moved to Level 3, had not had the desired effect in slowing the infection, he said.

While cases in the rest of the country had fallen sharply - from a generally higher level - case numbers in Dublin were staying “stubbornly” above 200 a day and over 300 on Monday, Dr Holohan said.

The effects of Level 5 restrictions imposed two weeks ago may be seen over the course of the next week, he added.

A further two Covid-19 related deaths were reported by Nphet. This brings to 1,917 the total number of deaths linked to the virus during the pandemic.

It also reported a further 767 cases of the disease, bringing the total number of cases to 62,750.

Of the new cases, 321 were in Dublin, 84 in Cork and 47 in Meath. There were also 34 in Limerick, 24 in Roscommon, with the remaining 257 cases spread across all other counties.

There were 103 Covid-19 deaths in October, 39 of them in nursing homes, according to Nphet officials. This compares to 36 deaths in September and five in August.

Dr Holohan said there had been a continuing decrease in the incidence of infection as measured by all main parameters. The situation in Ireland now compared favourably to much of the rest of Europe, he noted.

However, there was still “a long way to go” in suppressing the virus and it was important to keep up adherence to the measures that had been introduced by Government.

It was “far too early to say” if officials were satisfied with “where we are and where we have to keep going” in relation to the current restrictions.

There was concern about the increasing incidence among older people, he said. While the incidence among 19-24 year-olds had dropped from 450 cases per 100,000 people to under 300 in the space of a week, incidence was increasing among those people most likely to have an adverse outcome from the virus.

Officials said testing and contact tracing in schools was being beefed up to ensure already “robust” protections for staff and students were augmented.

A dedicated phone-line is being provided where principals can raise concerns and received a same-day response. Public servants from the health and education sectors are being redeployed to help with public health assessments of schools where necessary. Cases involving schools will be “red-flagged” within the testing and tracing system and the service will run seven days a week.

Up to October 28th, 599 schools had had testing after a case was identified, and over 15,000 students and staff had been tested.

A total of 384 cases had been identified with a positivity rate of 2.5 per cent.

In October, 15.6 per cent of all cases involved children of schoolgoing age, slightly up from the 14.5 per cent recorded the month before.

Under the new multi-disciplinary HSE “school teams”, there will be priority testing and a special seven-day phone line to enable principals seek guidance on what to do when a case of the virus is identified.

The new supports, introduced by the Department of Education from Monday as schools return from the mid-term break, have been broadly welcomed by teaching unions.

The Irish National Teachers Organisation (INTO) said the inclusion of education officials in the teams would help them better understand the specific environments.

“The department must ensure this new service delivers a significant improvement in support to schools, ensuring no principal is left waiting for days for a risk assessment or public health guidance,” INTO general secretary John Boyle said.

The organisation has also acknowledged an updated definition of “close and casual contacts” in school settings published by the Health Protection Surveillance Centre (HPSC) on Friday, which it had sought.

These include any person who has had face-to-face contact within less than one metre with a confirmed case of Covid-19 for more than 15 minutes in a school day.

It also includes anyone who has been between one and two metres from a confirmed case for more than 15 minutes but taking into account mitigating factors such as face-coverings, pods, and ventilation.

In a separate statement, the Teachers’ Union of Ireland (TUI) acknowledged the new measures but called for “ongoing, robust engagement” between unions, the department and public health authorities to “ensure that the concerns of teachers are fully addressed”.

It has also reiterated its call for an audit of schools to ensure they have the required resources to ensure full compliance with public health advice.

Nphet meets again on Thursday to review progress in reducing transmission of the virus. Dr Holohan said its advice on further measures should become clear by the final week of November.

Dr Holohan told a Nphet briefing that, with less than two weeks having passed since Government introduced Level 5 measures, it was “far too early to say we’re satisfied”, adding that “we have to keep going to get the case numbers to where we want them”.

While not ruling out easing Level 5 restrictions earlier than planned he added: “I do not envisage, at this stage, being in a position to recommend that.”

Asked about the provision of testing facilities for international travellers, he said Nphet would be looking at what measures could be implemented over the coming weeks.

If progress is made in reducing the scale of infection in Ireland, the importance of international travel increases relatively, he pointed out.

Ireland did not move “too early” to Level 5 restrictions, he said; many people anticipated the change by altering their individual behaviour to increase their level of protection.

Dr Holohan said public health officials were increasingly optimistic about developments in the provision of Covid-19 vaccines “in the months ahead and the early part of 2021” but supply would be a “big logistical challenge”.

Elsewhere, Garda powers to police coronavirus measures in pubs and restaurants are to be extended until the middle of 2021, it has emerged.

The North’s Department of Health (DoH) said seven of the fatalities had occurred in the 24 hours until Monday morning, and one had occurred previously.

The total number of people who have died in the North with Covid-19 now stands at 724, the department said.

A further 493 new cases of coronavirus were confirmed, bringing the total number of positive cases of Covid-19 identified in Northern Ireland since the beginning of the pandemic to 39,609.

There are now 379 people with coronavirus in the North’s hospitals, with 52 in intensive care.

Pupils returned to school in Northern Ireland on Monday after an extended, two-week half term holiday.

The spread of Covid-19 has slowed following the introduction of tighter restrictions - including the effective shutdown of the hospitality industry - just over two weeks ago, with the average number of cases over the last seven days now at 263 per 100,000 people, as compared to around 350 when the new measures were implemented.

The North’s First Minister, Arlene Foster, told the BBC’s Good Morning Ulster programme on Monday that the “current restrictions”, which are in place until November 13th, “would come to an end” and ministers were “now constructing a strategy as to how we can then continue to live with the virus”.

However, taking questions in the North’s Assembly on Monday, the Deputy First Minister, Michelle O’Neill, said the Executive intended “to publish work around an exit strategy over the coming days” but did not rule out an extension of the current restrictions.