Boys to be given HPV vaccine next year, pledges Leo Varadkar 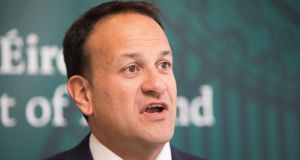 Taoiseach Leo Varadkar said there is “a quick consultation under way” about extending the HPV vaccine to boys and he anticipates it will come out in favour of the move. File photograph: Tom Honan/The Irish Times.

Boys in Ireland are to be included in a vaccination scheme designed to prevent cancer, Taoiseach Leo Varadkar has said.

The human papilloma virus (HPV) vaccine is already offered to teenage girls in their first year of secondary school, and Mr Varadkar said the Government is working to roll this out to boys next year.

It follows a report from the Health Information and Quality Authority (HIQA) which found there are “considerable health benefits” to extend the programme to boys.

The virus is a common sexually transmitted infection that can cause a range of cancers and genital warts.

The vaccine protects women from seven out of 10 cervical cancers which are caused by HPV.

“Hiqa are recommending that we extend the HPV vaccine to boys as has been done in quite a number of other jurisdictions,” Mr Varadkar said.

“There is a quick consultation under way about that which, we anticipate, will come out in favour of doing this too.

“(Health) Minister (Simon) Harris and I have spoken about this in the last number of days and we are going to put in train the procedures needed to do that to extend the vaccine to boys next year.

“Now there is a cost associated with that. You need to purchase the vaccine, you need a payment to GPs and set up all the logistics around it.

He said that, after the publication of the Hiqa report, the Government intends to take action and “make it a reality” in 2019.

He said the Medical Council has a role in assessing the performance of doctors and can impose a number of sanctions if they are found to have fallen short of standards.

Mr Varadkar said: “That is done by the Medical Council and for nurses through the Nursing and Midwifery Board of Ireland.

“I know people may feel that should be happening more frequently than it does.

“These are independent bodies and are set up to make those adjudications. Anyone can make a complaint to those bodies if they feel they have been badly treated or let down by the health service professional.”- PA