State did not apologise to Ruth Morrissey ‘now it is too late’, says husband after her death 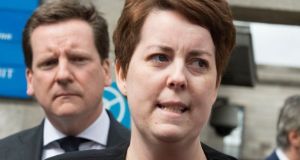 The State did not apologise to CervicalCheck campaigner Ruth Morrissey for the “magnitude of harm” caused by the misreading of her smear and “now it is too late”, her husband has said following the 39-year-old’s death.

Ms Morrissey, the terminally ill Limerick woman who sued the HSE and two laboratories over the misreading of her cervical smear test results, died on Sunday morning at Milford Hospice following a prolonged battle with cancer.

A statement issued by her solicitor Cian O’Carroll on behalf of her husband Paul, said Ms Morrissey “achieved so much in her life and chief among those accomplishments is the love she and Paul shared and the wonderful daughter they brought into this world and raised with love”.

“Ruth had a sparkle to her smile, her wit and her intelligence. That sparkle made her wonderful company and her friendship was a gift she gave generously to anyone who knew her,” it added.

The statement acknowledged that Ms Morrissey “showed courage and determination throughout that 36 day marathon trial” in the High Court action over the misreading of her cervical smear tests.

“Despite the magnitude of the harm caused to her by avoidable errors, despite the broken promise of a Taoiseach who said no other woman would have to go to trial, despite using Ruth as a test case through the final years and months of her life, neither the HSE nor the State has ever apologised to her, and now it is too late,” it added.

Mr O’Carroll said that the Morrissey and Moloney families wished to thank all those who gave help, support and medical care to Ms Morrissey.

“Ruth’s life was a very happy one and none of the hardships of recent years robbed her of her good cheer and positive spirit. She fought fiercely to stay alive for the family she adored,” the statement said.

“The example she set stands as an enduring inspiration of strength and determination that should help many others through difficult times in the future.”Earlier this week, the Supreme Court was told that Ms Morrissey and her husband Paul had been paid the full sum of €2.16 million damages awarded to them by the High Court over misreading of her cervical smear tests.

In 2019, the High Court heard Ms Morrissey was not told until 2018 that a review carried out in 2014 showed smears taken under the CervicalCheck screening programme in 2009 and 2012 had been incorrectly reported. Her cancer returned in 2018, leaving her terminally ill.

Two laboratories - Quest Diagnostics and Medlab - and the HSE had appealed aspects of the May 2019 High Court judgment of Mr Justice Kevin Cross, regarded as a test case concerning the standard of care in cervical screening.

I was on my own this morning at home when I received the news that I have been dreading for some time now, the news that my good friend and fellow CervicalCheck campaigner Ruth Morrissey has died.

President Michael D. Higgins paid tribute to Ms Morrissey, saying so many people across Ireland will have learned of her death with “great sadness”.

“Ruth Morrissey’s tremendous courage in an arduous campaign for truth and justice leaves a legacy of courage for all Irish people, and for those campaigning for women’s right to healthcare in particular.

“Sabina and I send our sincere condolences to her husband Paul, their daughter, her family and friends, and to all those who have shared Mrs Morrissey’s journey,” he said.

Taoiseach Micheál Martin said he was deeply saddened by her death and extended sympathies to her family. He described her as a “brave, courageous woman who worked tirelessly for others and for future generations of women in this country.”

“She was generous of spirit and had the interests of others at heart,” he said.

Tánaiste Leo Varadkar also extended his sympathy to Ms Morrissey’s family and friends. He said that last October, while he was taoiseach, he gave a formal State apology to all women and their families affected by the CervicalCheck scandal.

Ms Morrissey along with campaigners such as Vicky Phelan, Lorraine Walsh, Stephen Teap and the late Emma Mhic Mhathúna, were leading women’s health advocates in light of the scandal, which affected some 221 women.

Ms Phelan paid tribute to Ms Morrissey on Twitter, describing her as “one of the strongest women I know, and also one of the most positive”.

“I never once saw her without a smile on her face and I saw her when she was very ill,” Ms Phelan posted.

“My children are away for a few days at my parents. I am so glad they are not here. I don’t have to try to put on a brave face and can just sit here with my feelings and grieve for Ruth and for the life she didn’t get to live, for the time she didn’t get to spend with Libby.”

Fellow campaigner Stephen Teap said he was “strugglin[g] to find the words to display my sadness at hearing this news”.

He described Ms Morrissey as “a kind and gentle soul who I was honoured to know, always checking up on me and my boys even in the middle of her own battles. This world is at a loss without her.”

Lorraine Walsh said she was “a beautiful, gentle lady”.

“Your life has been cut short far too soon, you shouldered a great burden for many of us,” she said.

Minister for Health Stephen Donnelly said it is “with great sadness” that he learned of her death, adding that she was “an incredible, brave, compassionate woman, campaigner and patient advocate”.

Labour leader Alan Kelly said : “Ruth and her family have shown so much bravery in the eyes of adversary since her cancer diagnosis.It is never easy to go up against the State to challenge an injustice but Ruth did just that.

“The State should never have appealed Ruth’s case given the circumstances but her winning has set the standard now for many women in Ireland.Ruth’s fight for justice while enduring a devastating cancer diagnosis has not just been an inspiration for me but for so many people right across our island.”

In his judgement of her case, Mr Justice Kevin Cross said that if her 2009 smear had been properly analysed and her 2012 slide was deemed inadequate, she would have been spared the pain and distress that followed her.

“She would have been spared the prospect and knowledge that her daughter and her husband will have to go through life without her care and guidance,” the judge stated.

Speaking outside the High Court after the landmark ruling in 2019, Ms Morrissey said she hoped the decision in her case might mean that the “women who are left” won’t have to go through a court process and “fight for their right to have a good life in what they have left.”

She encouraged women to continue going for smear tests “even though it failed me, but it does save many, many lives.”