Spain, Portugal and France ‘not at safe level’ to be on travel ‘green list’ 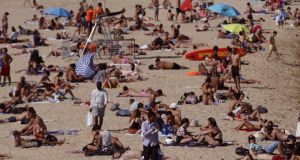 Higher coronavirus infection rates in the popular holiday destinations of Spain, Portugal and France should rule out their inclusion on a “green list” of safe countries for unrestricted travel, a leading virologist said.

The Government plans to ease travel restrictions to and from some countries with the publication of a list of countries on Monday with similar coronavirus infection rates to Ireland.

Travellers returning from those countries will not have to self-isolate for 14 days.

One leading doctor on the National Public Health Emergency Team (NPHET), which informs Government policy, has said that the public should not expect the most popular sun destinations to be on the list.

Dr Cillian De Gascun, chair of the expert advisory group to NPHET, said the typical destinations for Irish holidaymakers were “not at a safe level” right now.

A closely watched metric on the rate of infections in countries, which is collated by the European Centre for Disease Prevention and Control, shows that Spain, France, Portugal and Croatia have considerably higher numbers of coronavirus cases than Ireland.

“It would be very difficult to justify putting a country that is established above our own 14-day cumulative incidence rate because it is very risky and an unnecessary risk,” Dr De Gascun told The Irish Times.

Eight European countries have lower rates of infection than Ireland based on the figures on 14-day cases: Norway, Finland, Hungary, Estonia, Lithuanian, Latvia, Cyprus and Malta.

Minister for Foreign Affairs Simon Coveney said on Friday that the United States would not be on the list because of the rate of infections there and it was “unlikely” the United Kingdom would be on it either.

“We will certainly proceed with caution here, taking advice from the public health experts,” he said last night.

He warned against non-essential overseas trips saying that international travel still represented “a very significant risk to the reintroduction of this virus back into Ireland”.

NPHET reported three more coronavirus-related deaths and 34 new cases – the highest number of daily confirmed cases in more than a month – on Friday. This brings the death toll from the virus to 1,752 and the total number of known cases of the disease to 25,730.

Dr De Gascun said NPHET would still be concerned about people travelling to resorts even in “green list” countries with low levels of infection because they could be “interacting with crowds” from countries with higher infection rates “if everyone flocks to those regions”.

“People typically go to resorts with restaurants and bars, and it is very hard to know where the safer places are likely to be,” said the director of the UCD’s National Virus Reference Laboratory.

“If you are at a resort town where people are travelling from the likes of Spain, France or the [United] States, you could find yourself in a situation where you can’t really do a risk assessment yourself. That is why we would discourage people from travelling.”

There is expected to be between 10 and 15 countries on the list with the majority being in Europe, according to Government sources. Several countries on the draft list are unlikely to be considered attractive holiday destinations and some will be significant distances from Ireland.

The final list will be signed off by Cabinet after a meeting on Monday.

Epidemiological data from shortlisted countries will be tracked this weekend to watch for spikes in infections with the final number of countries subject to change over the coming two days.

A number of additional countries are considered borderline for inclusion and may not be on the initial list but could be added when the list is reviewed again in two weeks’ time.

Infection rates in Italy and Greece were on Friday only marginally higher than in Ireland.

Taoiseach Micheál Martin and the two Government officials accompanying him to the EU summit in Brussels will not, as essential workers, be required to self-quarantine on their return to the country this weekend, though they will restrict their personal movements.

He returns from Belgium as virologists in the country warned that it could be at the start of a second wave of infections after reporting a 32 per cent increase in coronavirus cases in a week.

Stay on top of the latest newsSIGN UP HERE
Confronting Coronavirus · The biggest story of our lives, part 2