Covid-19: Only one in 20 airport arrivals contacted for quarantine checks 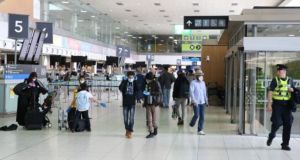 Just one in every 20 overseas passengers who have arrived in the State via Dublin Airport since the start of July has been spoken to by officials to check they intend to adhere to the 14-day Covid-19 quarantine rule.

The low rate of checks will cause serious concern about Ireland’s ability to detect imported cases of the disease and the capacity to monitor and contact visitors.

Between July 1st and 13th, the Dublin Airport Authority recorded 52,753 new arrivals at Dublin Airport with some 30 per cent of those exempt from the legal obligation to fill out a passenger locator form, according to figures obtained from the Department of Justice.

That means some 37,000 passengers who arrived through the airport in the first 13 days of this month were bound by the obligation to fill out a form recording their contact number and the address where they planned to quarantine for their first 14 days in the State.

Failure to fill out the form, and to do so accurately, has been a criminal offence since May 28th, punishable on conviction by up to six months in prison and a fine of up to €2,500.

Any newly arrived passengers found not to be staying at the address they gave can be regarded as having filled out the form inaccurately and prosecuted.

The Irish Times has learned that criminal investigations have been commenced against three overseas visitors for failing to fill out passenger locator forms.

The border management unit (BMU), which is part of the Department of Justice, made 3,532 calls to check if the passengers who arrived between July 1st and 13th were at the addresses they stated on their forms and were quarantining. Of those calls, some 1,698 were answered.

It means of the approximate 37,000 newly arrived passengers who were obliged to complete the form and then quarantine for 14 days, an attempt has been made to contact just under 10 per cent, and just under 5 per cent have answered their phones. The only passenger figures available last night were for Dublin Airport.

Newly arrived passengers can be exempt from completing the form if they are transiting to the North or plan to spend less than two days in the Republic.

Up until the end of June almost all passengers who arrived in the Republic were contacted by the BMU, on behalf of the health authorities.

However, since the start of July passenger numbers have increased so much that only a percentage of newly arrived passengers can be contacted and just under half of those contacted are answering their phones, the Department of Justice told The Irish Times.

While the BMU and Garda National Immigration Bureau (GNIB) have been tasked with collating the forms and making the follow-up calls, they have been doing so on behalf of the Department of Health, which is responsible for the system.

However, the Department of Justice said because passenger numbers were “increasing significantly” the BMU and GNIB would need to focus on their core work of immigration control and the HSE would soon take over making the follow-up calls to the new arrivals.

The Department added the passenger locator form was about to be “put on an electronic basis” and as well as allowing the checking of new arrivals, it would also aid in contact tracing if there was a confirmed case of Covid19 on a flight or ferry coming to Ireland.

“If a person arrives into Ireland, they will be legally obliged to fill out this form, regardless of their nationality,” the Department said.