Full sum given despite appeal allowed by one of the labs over €575,000 of award to Paul Morrissey 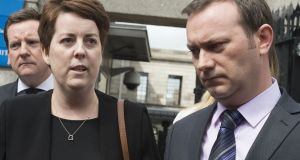 The Supreme Court has been told that terminally ill Ruth Morrissey and her husband Paul have been paid the full sum of €2.16m damages awarded to them by the High Court over misreading of her cervical smear tests.

The full sum comprises €757,508 for Ms Morrissey and some €1.4m for her husband. It has been paid despite a subsequent Supreme Court finding which, while dismissing most of the appeals by two laboratories and the HSE over the High Court decision, allowed an appeal by one of the labs over €575,000 of the award to Mr Morrissey.

The €575,000 related to services which would have been provided to the family by Ms Morrissey were it not for her shortened life expectancy.

The Government previously guaranteed, irrespective of what happened in the Supreme Court, that the High Court award and their legal costs would be paid to the couple.

Two laboratories - Quest Diagnostics and Medlab - and the HSE had appealed aspects of the May 2019 High Court judgment of Mr Justice Kevin Cross, regarded as a test case concerning the standard of care in cervical screening.

The High Court heard Ms Morrissey was not told until 2018 that a review carried out in 2014 showed smears taken under the CervicalCheck screening programme in 2009 and 2012 had been incorrectly reported. Her cancer returned in 2018.

The High Court found in favour of the Morriseys against all three defendants but it also found the HSE, apart from a sum of €10,000, was entitled to an indemnity against the laboratories.

Last March, the Supreme Court held the High Court was correct in applying a standard for screening where screeners should have no doubt a sample is adequate and does not contain any suspicious material before stating it is clear.

It said experts, not the court, identified the standard expected of a normally competent screener as being one which precludes giving a clear result, unless there was absolute confidence the test was clear.

While finding the High Court was incorrect to hold the HSE was vicariously liable for the negligent acts of the laboratories, it said the HSE had a “non-delegable duty” in respect of patients availing of CervicalCheck.

The part of the HSE’s appeal which suggested it should not be fixed with any liability in respect of negligence established against the laboratories was dismissed.

The court upheld most of the damages awarded but allowed Medlab’s appeal over €575,000 of the sum awarded to Mr Morrissey.

On Thursday, the matter returned before the court for submissions concerning final orders and costs.

Jeremy Maher SC, for the Morrisseys, sought costs jointly and separately against all three appellants.

He also argued the final orders against the HSE and Quest should not reflect the finding which reduced the damages to Paul Morrissey by €575,000 because only Medlab had appealed over the €575,000.

Michael Cush SC, for Quest, and Pat Hanratty SC, for the HSE, said the damages reduction should apply to all three appellants. That would not prejudice the Morrisseys who have been paid the full amount but is important for reasons including Quest would otherwise be left in substance with a financial penalty, Mr Cush argued.

Mr Cush and Eoin McCullough SC, for Medlab, also argued there should be separate costs orders in relation to the individual appeals.

Having heard the sides, the Chief Justice, Mr Justice Frank Clarke said the five judge court hoped to deliver its ruling within a short period.