Spinal rod concerns expressed to Simon Harris a year ago 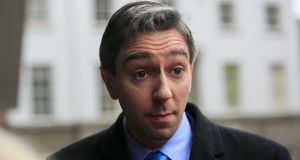 Minister for Health Simon Harris: pointed out that the Health Products Regulatory Authority was responsible for the regulation of medical devices. Photograph: Gareth Chaney/Collins

A senior paediatric surgeon expressed concerns over a system of medical rods implanted in young children with severe scoliosis to Minister for Health Simon Harris over a year ago.

Magec Model X rods, which are used to treat curvature of the spine, were the subject of a product recall last month when it emerged some of them were defective and risked exposing internal components.

In December, 2018 Prof Damian McCormack, a paediatric orthopaedic surgeon at Temple Street children’s hospital, contacted Mr Harris’s office over concerns relating to an earlier model of the Magec rods, one that was not subject to last month’s recall.

In his correspondence, a copy of which has been seen by The Irish Times, Prof McCormack said he had also contacted the medical regulator with his concerns regarding the effectiveness of the product.

Prof McCormack did not respond to efforts to contact him. However, his decision to contact Mr Harris appears to have been prompted by a question on Magec raised in the Dáil days beforehand.

On December 5th, Fianna Fáil TD Bobby Aylward asked Mr Harris what steps he had taken “to satisfy himself that there are no health and safety risks to children with scoliosis being treated with this device”.

The previous day Fianna Fáil TD John McGuinness asked the Minister if there was a “formal tracking register” for patients and if he intended to respond to unspecified concerns regarding the rods.

Although last month’s product recall related to a specific problem with the Model X version, concerns have previously arisen about the system.

In response to Mr McGuinness, the Minister said the Magec rods were a CE-marked medical device assessed by an EU-based body as complying with the safety and performance requirements of the EU medical device directives.

“Certification to the EU legislation necessitates that any clinical risks associated with a device are mitigated and reduced as far as possible, and that all risks cumulatively are acceptable when weighed against the clinical benefit,” he said.

At the time of the parliamentary questions, some concerns had emerged regarding the Magec devices among families of children with scoliosis.

Mr Harris also pointed out at the time that the Health Products Regulatory Authority was responsible for the regulation of medicines and medical devices.

It is understood Mr Harris’s response to concerns raised by Prof McCormack was similar to his comments in the Dáil.

Last month, following the release of its field safety and recall notice, US-based manufacturer NuVasive said the safety of patients and its ability to support them and surgeons were the priorities. The company currently sells two versions of its rods.

“We realise the Magec technology is the standard of care for early onset scoliosis in many regions,” it said.

It said its products had been shown to be effective in treating early onset scoliosis, “while also helping to avoid increased pain, elevated complication rates, and psychological distress” associated with alternative surgery.

The rods have been used in a “very small” number of cases in Ireland, according to Children’s Health Ireland, the umbrella organisation for Irish paediatric hospitals, which has declined to say how many patients were involved, citing patient confidentiality concerns.