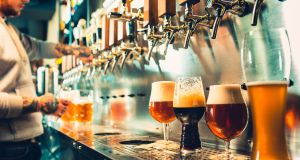 The lobbyists also had 36 separate meetings with Ministers of State across all portfolios. Photograph: iStock

Research by Alcohol Action Ireland to be presented at an international conference in Dublin on Monday shows that in 2018, the year the Public Health (Alcohol) Bill was enacted but not implemented, drinks industry representatives registered 96 lobbying returns.

The returns showed meetings on 361 occasions that year when the Dáil was in session for only 108 days and passed the Bill after a two-year delay in the Seanad.

The paper is to be delivered at the bi-annual meeting of the Global Alcohol Policy Alliance, a network of international not-for-profit organisations and people in public health agencies whose aim is to “reduce alcohol-related harm worldwide by promoting science-based policies independent of commercial interests”.

The lobbying returns for the legislation in Ireland showed four of the top 10 global alcohol businesses were among eight drinks producers, four public affairs consultancies and 14 linked businesses including vintners and advertisers who between them met eight Cabinet Ministers including the Taoiseach Leo Varadkar as well as his chief adviser and the Government Chief Whip and deputy whip.

The lobbyists also had 36 separate meetings with Ministers of State across all portfolios and 12 meetings with ministerial special advisers in eight departments including the Department of Health.

They also met individual TDs on 309 occasions, and contacted each TD by letter or email 17 times that year.

Director of communications and advocacy for Alcohol Action Ireland Eunan McKinney will tell conference delegates “the onslaught of pressure on Irish parliamentarians to stall and/or amend the alcohol legislation was incessant and unrelenting.

“This has been the principal source of delay to enacting a framework for alcohol control and probably the reason, now, for the further delay in its implementation”.

Mr McKinney states that 510 days after the Bill was passed, “Ireland still does not have minimum unit pricing for alcohol products.

“It still is not informing its citizens of the known risk between alcohol and fatal cancers, and it still is allowing alcohol brands pitch their chat-up lines to the nation’s children.”

Speaking in advance of the conference Mr McKinney said that in the more than 16 months since the Bill was passed “only two or three parts” have been implemented.

They include the removal of advertising from within 200m of schools and from public transport.

The result is that there is very little advertising of alcohol in outdoor advertising now, he acknowledged.

In cinemas, alcohol advertising can only be shown in films for over 18s.

In November this year, there will be structural separation of alcohol from other products in supermarkets, shops and petrol stations.

“That measure was significantly diluted by the time it came out of the Seanad,” he adds.

But “the really big stuff” has not happened, including minimum unit pricing to create a base price below which alcohol cannot be sold, he said.

The broadcasting watershed preventing alcohol advertising being shown before 9pm has not yet come into effect.

The labelling of products has yet to be implemented where they will include ingredients and calorie content as well as the message that alcohol consumption is linked to cancer.

The conference was officially opened by Minister for Health Simon Harris who said “the way we consume alcohol in Ireland damages our health, our society and our economy.

“If we can reduce our alcohol consumption and delay the age at which our children start to drink, we will save lives and prevent the many serious illnesses that are caused by the misuse of alcohol.”

The theme of the Dublin conference is Alcohol Equity and Global Health: the benefit of alcohol control for sustainable development for all.

At the conference the HSE will present its askaboutalcohol.ie campaign which was developed to support the 2018 legislation.

Project manager of the HSE alcohol programme Marion Rackard said the campaign aimed to stimulate new conversations about alcohol and to support behaviour change by “providing trusted information on alcohol from health professionals including: A to Z information on alcohol and related harms, a drinks calculator, a self-assessment tool, a service finder and a helpline”.