Adult patient travelled from Italy through Dublin into Northern Ireland

At a media briefing in Dublin the HSE has said that there have been 90 suspected cases of Covid-19 tested here, but none have been positive for the virus. Video: Bryan O'Brien 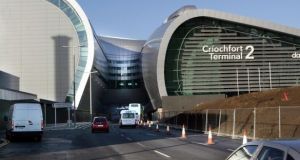 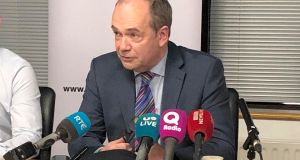 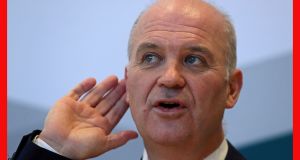 One case of the coronavirus has been confirmed in Northern Ireland.

The patient flew from northern Italy to Dublin and then travelled on to Northern Ireland, it added.

The sample from the patient has been sent to the UK for verification.

It has been described at this stage as a “presumptive positive test for coronavirus”.

The announcement was made at a briefing by the agency in Belfast on Thursday evening.

Northern Ireland’s chief medical officer Dr Michael McBride would not confirm some reports that the patient travelled by public transport from Dublin to Northern Ireland.

He said that efforts were being made to contact all those who were in close contact with the individual.

Dr McBride would not say if the patient was a man or a woman but confirmed it was an adult patient.

He said it was not a case of someone returning from a school ski trip in Northern Italy.

No details were provided of where the patient is being treated.

“We have been planning for the first positive case in Northern Ireland and have made clear that it was a question of when not if,” he said.

“We have robust infection control measures in place which enable us to respond immediately. Our health service is used to managing infections and would assure the public that we are prepared.

“Our advice to the public remains the same. Members of the public who have visited affected regions and have symptoms are advised to self-isolate at home and contact their GP in the first instance. Advice will then be given on next steps, including testing if required”.

To help reduce any potential spread of coronavirus, he urged people to follow the steps that are recommended for similar illnesses such as cold and flu - “catch, bin it, kill it”.

“Always carry tissues to catch your cough or sneeze, dispose of the tissue as soon as possible after using it, and clean your hands as soon as you can as germs can spread to every surface you touch.”

Dr Adrian Mairs, acting director of public health at the Public Health Agency added: “Northern Ireland has well-prepared and rigorously-tested plans for dealing with infectious diseases, and these have been activated. This will help ensure that the patient receives appropriate care, and the likelihood of spread is minimised. I would like to reassure the public that the risk to the wider population remains low.”

Public health officials in the Republic are likely to be in contact with their Northern counterparts in relation to the time spent by the person south of the Border. They will be anxious to trace any contacts of the person on the flight from Italy, and through onward travel to Belfast.

The case is likely to raise concerns about the level of cooperation between North and South on the issue in the post-Brexit environment. The UK has taken a more stringent line on travel restrictions and the requirement to self-isolate than the Republic, which along with other EU member states has followed the advice of the European Centre for Disease Control.

The HSE’s Health Protection Surveillance Centre said on Thursday night it had been informed of the case.

“The patient is in isolation in Northern Ireland and is receiving treatment. Public Health authorities have activated contact tracing protocols,” it said.

The Minister for Health, Simon Harris, said: “Given the evolving situation this first case of Covid-19 disease was not unexpected. The National Public Health Emergency Team has been planning for this scenario since January.”

He said the general public should continue to adhere to the public health protocols issued by the Department of Health.

Dr Tony Holohan, chief medical officer at the Department of Health, said the HSE is well-prepared “and is working to inform any contacts the patient had in order to prevent transmission.”

He said the HSE would be working to trace those who sat within two rows of the confirmed case when they flew into Dublin from Italy. He said the passenger and crew list are kept and provided to public health authorities as part of international health obligations that apply to airline carriers.

“Tonight the HSE will be making direct contact if they have identified the contacts ... those who sit within two rows of the individual concerned, that’s close contact in the context of a plane. They will make contact with them and give advice to them as to what they should do,” the told RTÉ’s 9pm TV news.

He said information on whether the patient travelled on public transport in the Republic would be provided to health authorities here, if relevant “and that will all form part of the contact tracing.

“So the people who need to know know but we won’t be making public information in relation to this because patient confidentiality is critically important in all of these situations,” he said.

He stressed Covid-19 is spread through close contact with an infected person’s body fluids such as droplets from coughing or sneezing, or by touching surfaces that an infected person has coughed or sneezed on.

“Close contact involves either face to face contact or spending more than 15 minutes within two metres of an infected person. The risk of transmission through casual contact is low,” he said.

Public health protocols, similar to those used to respond to previous incidents of pandemic influenza, SARS and MERS, have been in place since January and are operating effectively, he added.

The general public are advised to follow advice from the HSE and the Health Protection Surveillance Centre to protect their health. Any person concerned that they may have symptoms of Covid-19 should immediately isolate themselves from others and phone their GP.

Earlier on Thursday, before the announcement of the positive test, Mr Harris spoke to the North’s health minister Robin Swann.

Emphasising the need for cooperation in preparedness for Covid-19 , Mr Harris said cross-Border communications was vital. Both men agreed to continue to work together on the issue.

Meanwhile two more people tested positive for the virus in the UK on Thursday. One is a parent at a Buxton primary school in Derbyshire, who contracted the virus in Tenerife, where 168 Britons are being kept in a hotel on the south west of the island. The other patient also contracted the virus in Italy, which has become the worst affected country in Europe with more than 400 cases and 14 deaths.

The new cases bring the total number of people diagnosed with Covid-19 in the UK to 16.

England’s chief medical officer, Professor Chris Whitty, warned that onward transmission between people in the UK was “just a matter of time in my view”.