Want to protect yourself from coronavirus? Then wash your hands 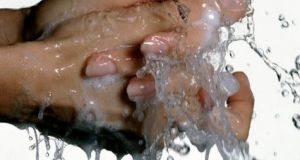 To wash your hands properly lather your hands, including the backs, between your fingers, and under your nails and scrub for at least 20 seconds. Photograph: Getty

There are a number of steps people can take to protect themselves from the new coronavirus (also known as Covid-19). Perhaps the most crucial is regular, thorough, hand washing.

How to protect yourself and others?

Wash your hands properly. Wet your hands with clean, running water and apply soap. Lather your hands, including the backs, between your fingers, and under your nails and scrub for at least 20 seconds. Rinse.

When an infected person coughs or sneezes, they release droplets of saliva or mucus. These droplets can fall on people in the vicinity and can be either directly inhaled or picked up on the hands then transferred when someone touches their face, causing infection.

Why is washing your hands so important?

We’re always being told that we should wash our hands, but many of us still find reasons to skip this basic everyday habit; maybe the water is too cold, or too hot, the soap doesn’t smell nice or we’re just in too much of a hurry.

The results of a huge study in 2015, and published in the Lancet, mean that we no longer have any excuses. This simple everyday practice could be vital, not just for our own and our family’s health, but for that of the country and even all of our species.

Researchers at the University of Southampton randomly divided more than 20,000 people from GP lists into two groups, one of which was invited to visit a website designed to encourage people to wash their hands, while the other group didn’t get access.

After three years of follow-up, Paul Little and his team found that those in the website group reported having fewer colds, flu and gastroenteric infections.

Participants’ immediate families saw similar health benefits. And these self-reported findings were confirmed as those in the handwash website arm of the study also showed up less often in GPs’ surgeries and were prescribed fewer antibiotics.

The effects weren’t huge, with 10 per cent to 20 per cent reductions in infections and consultations. But small effects multiplied to population level to produce huge benefits from what was a cheap, automated and easily accessed intervention.

So this study at last provides some robust evidence to confirm what we’ve long suspected. Handwashing has three big benefits: first, it saves us catching infections from those around us. Second, it prevents people around us catching our germs. And third, it saves doctors’ time and the national economy money.

However, what this study didn’t trumpet is that there are nowadays even more important reasons to be concerned about handwashing. Our species is in a longstanding evolutionary arms race with pathogens, and while technological developments such as vaccines, antibiotics and sanitation have recently given us the upper hand, the bugs are fighting back.

Respiratory viruses such as coronavirus, swine flu, Sars and bird flu have the potential to mutate and become superbugs that can be both devastating in their capacity to kill and in their ability to transmit themselves from person to person.

Our best form of attack against pandemic flu is defence. Regular handwashing by everybody in any place where such bugs arise means such superviruses can’t get a foothold, and can’t get out and spread.

The rise of the bacterial superbugs that can’t be controlled by existing antibiotics. Because antibiotics have been overused to control infections, E coli, Staphylococcus aureus and Klebsiella, for example, are evolving ways around them. Soon we are likely to be returned to the medieval days when a small wound or a routine operation can be deadly.

How do European states compare when it comes to hand washing?

A review of evidence suggests that globally less than one in five people wash their hands when they should, resulting in some 650,000 needless deaths a year, largely in countries with high levels of endemic infections.

Despite broad awareness of the merits of washing your hands, especially after using the bathroom, a 2015 report by Gallup International showed very significant numbers of people do not.

The Gallup research found that the Dutch are the least likely to wash their hands with soap and water after using the toilet, with only 50 per cent reporting that they do so.

This compares with to 96 per cent of those in Bosnia & Herzegovina, which was found to be the most hygienic state.

In Ireland, some 74 per cent said they washed their hands. Portugal has the second highest rate of handwashing, at 85 per cent. - Guardian /Agencies