Schools should not screen temperature or symptoms, says Hiqa 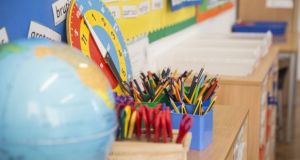 The health authority’s review into how other countries are dealing with Covid-19 outbreaks in schools was published on Friday. Photograph: iStock.

Temperature and symptom screening should not be conducted in schools, the Health Information and Quality Authority (Hiqa) has said following a review of international Covid-19 guidelines.

The health authority’s review into how other countries are dealing with Covid-19 outbreaks in schools, published on Friday, concluded that schools should not make a decision to close without input from public health authorities and that any reported symptoms or absenteeism associated with the virus be reported to the appropriate public health or Government body.

The review, which was carried out to help assist the National Public Health Emergency Team’s (NPHET) response to the pandemic, examined guidelines in 20 countries and two international public health bodies and found an overall consensus that children should stay home if they have a fever. However, there were differences of opinion as to what other symptoms should require a child to stay out of school.

Evidence to date suggests the majority of children and young people diagnosed with Covid-19 suffer mild or no symptoms, notes the report. All countries and health bodies reviewed agreed that any child who becomes symptomatic in school should be “isolated rapidly” and sent home or to a medical facility depending in the severity of the symptoms.

There was also agreement that a child’s fever must be resolved before s/he returns to school while some countries said children who tested positive and had lingering symptoms, such as a dry cough or loss of smell or taste, could go back into the school setting after isolating for between 7 to 14 days.

Most agreed that close contacts to a child who tests positive should quarantine for 14 days, although some suggested seven to ten days would be enough.

All countries reviewed agreed that universal health screening for children, including temperature and symptoms screening, should not be conducted in schools. Singapore was the only country recommending these measures be taken daily.

On symptoms, German guidances states that a child with a cough does not necessarily mean s/he has Covid-19 and that the opinion of a paediatrician should be sought, while Norwegian guidance recommends that young people and school staff with pollen allergy symptoms – such as a runny nose or itchy eyes – may attend school. In contrast, Sweden advises that people with allergies stay home even if they experience mild symptoms.

Singaporean guidance states that children aged 12 or younger who feel unwell, including those with respiratory symptoms, should be assessed by a doctor.

Hiqa warned of limited international guidance around how to identify and manage Covid-19 symptoms among clinically vulnerable young people and children.

There was a variation in guidance as to whether an entire classroom should quarantine if a case is confirmed and what steps family members should take around staying home.

The review notes that the local level of community transmission should be a key consideration when deciding whether to close a school and that public health guidelines on managing Covid-19 in schools will need to evolve as further evidence emerges.

Information for the Hiqa review was collected from a number of international health bodies, including the World Health Organisation and the European Centre for Disease Prevention and Control, health departments in Australia, New Zealand, Canada, Switzerland and Singapore and through an examination of measures being taken in nine European countries – Austria, the Netherlands, Belgium, Spain, France, Iceland, Denmark, Germany and Sweden.

Hiqa deputy chief executive Dr Máirín Ryan said there was “limited evidence of child-to-child or child-to-adult” transmission of the virus but noted that when transmission did occur, and results in school closures, it can have an “adverse impact” on children’s social, emotional and behavioural health.

The best way to manage Covid-19 in schools is by ensuring students and staff who have symptoms stay at home and that everyone practices “good respiratory etiquette and performs frequent hand hygiene”, said Dr Ryan.

However, it warned of “little guidance” from international bodies regarding medium or long term planning for emergency dispatches in the context of the pandemic and highlighted the importance of monitoring data and service provision for future planning.

International health documents with “clear authority to provide guidance” published between February and July 2020 were analysed by Hiqa, including information from United States government institutions and organisations involved in providing emergency services.

Surveys carried out among those providing emergency services were also examined, including documents previously published on the Sars pandemic. The importance of developing backup sites and strengthening infrastructure, including cybersecurity, was highlighted in the documents, as well as updating protocols and procedures in the context of Covid-19.

However, many of these international documents did not use the term ‘guidelines’ to describe their content while few documents provided guidance on the topic of medical dispatch centres and often lacked detailed descriptions, cautioned Hiqa.

Overall, the documents largely comprised of “simple recommendations or short lists of points for consideration in planning services”, the Hiqa review found.