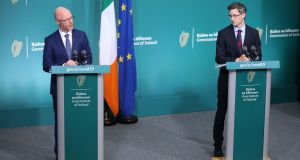 A further 164 cases of Covid-19 have been confirmed in the Republic. No additional deaths were reported by the National Public Health Emergency Team (NPHET) on Wednesday.

There have been a total of 1,777 deaths related to Covid-19 in the State since the pandemic began, along with 28,363 confirmed cases.

The majority of the new cases, 93, were recorded in Dublin with 22 in Kildare, 10 in Tipperary, nine in Cork, eight in Carlow, six in Waterford, six in Offaly and the remaining 10 cases are spread between counties Galway, Kilkenny, Limerick, Louth and Roscommon.

Close contacts of a confirmed case or outbreaks are associated with 80 of the cases. Community transmission accounts for 21.

Eighty-three of Wednesday’s cases were in men with 81 in women and 65 per cent of the cases are in people under the age of 45.

Validation of data at the Health Protection Surveillance Centre has resulted in the denotification of two cases – the current total reflects this.

Acting chief medical officer Dr Ronan Glynn said: “We have seen a significant number of cases in Dublin, Kildare, Tipperary, Limerick, Cork and Carlow over the past number of days. I would urge people everywhere to follow the public health advice and reduce mixing of households where at all possible.”

Meanwhile, the number of coronavirus outbreaks of infections in family homes have doubled in a week, new figures from State health officials show.

The latest report from the Health Protection Surveillance Centre, the HSE unit that monitors the spread of the Covid-19 disease, shows that there were 156 family outbreaks in the month of August as of Sunday last. This was up from 78 a week earlier.

As of midnight Tuesday 25th August, the HPSC @hpscireland has been notified of 164 confirmed cases of COVID-19.

An outbreak is defined as two cases or more of the disease.

There have been more family outbreaks in August to date than the number reported in both June and July combined. There were 21 in June and 92 in July. This was down from highs of 715 in March, 545 in April and 101 in May.

The increase in the number of infections in home and family settings has coincided with a spread of Covid-19 cases from meat processing plants and food factories to households.

The rise in cases forced State public officials to impose new restrictions on house parties and gatherings in indoor settings.

There have been 1,776 outbreaks of the disease in private houses, which account for the highest number of clusters, followed by nursing homes with 275 clusters of infection.

Family outbreaks accounts for the vast majority of clusters in private houses. The bulk of the private house outbreaks have been in the more populated east of the country with 1,244 clusters.

There have been 2,584 outbreaks in total during the pandemic.

Earlier on Wednesday, Minister for Health Stephen Donnelly has said the local lockdown in Kildare, Laois and Offaly has “without a doubt” saved lives and signalled that further localised measures will be used to fight Covid-19 in Ireland.

“Thanks to the amazing efforts of the people of Kildare, Laois and Offaly [KLO], we know that localised measures can work, and it is without a doubt that the people of KLO have saved a lot of lives,” he told the Oireachtas Covid-19 committee.

He said that measures which avoid lockdown by “seeking out and minimising” situations where the virus spreads “are what we want to use”.

“That’s the approach we’re using across Ireland – targeted measures to suppress the virus while keeping as much of our society and our economy open as possible,” he said.

Mr Donnelly defended plans to introduce randomised testing at airports, saying it is “to provide an extra security measure in terms of testing and tracing,” after the scheme was criticised by Social Democrats co-leader Róisín Shortall.

He said he would not yet commit to a public inquiry into deaths in nursing homes, and that consideration is needed as to the best approach for the families of people who have died.

He faced criticism of a lack of detail on the Health service’s winter plan and the switch from a phased approach to easing lockdown to an ongoing colour coded approach. Labour TD for Fingal Duncan Smith said there was “nothing that gives people clarity or guidance on what they have to do . . . [this is] deeply, deeply concerning”.

He said the winter plan will be launched several months early, and “it is not going to be cheap”.