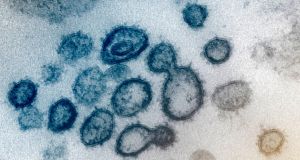 An electron microscope image of the Sars-cov-2 virus, which causes Covid-19. Photograph: US National Institutes of Health via AP

The rate of new coronavirus infections in Northern Ireland is now “significantly higher” than in the Republic of Ireland or the UK as a whole, the North’s chief scientific officer has warned.

On Friday the number of cases per 100,000 in Northern Ireland over 14 days was 38.6, according to Prof Ian Young, compared with the European Centre for Disease Control’s figure of 31.1 in the Republic and 23.2 in the UK.

Prof Young told The Irish Times he did not have a “simple explanation” for the increased infection rate in the North, which had performed “much better” than the rest of the UK earlier in the pandemic.

“In particular, I don’t know whether our population are adhering less well to restrictions than the population in England, Scotland and Wales, which is the obvious thing to think about, but it’s very hard to get accurate comparative data.”

However, while the North’s figures were currently higher than those in the Republic, he said the numbers fluctuated and the outbreaks remained “broadly similar” on both sides of the Border.

“We’re both dealing with outbreaks associated with meat factories, we both observe greater number of cases in the major urban settings, particularly Belfast and Dublin, and we both have much lower incidence in some of the rural settings.”

Concerns have been voiced throughout the pandemic that the existence of the Border could hamper the fight against coronavirus.

However, Prof Young said the presence of the Border had had little impact on the spread of the virus or the fight against it, with the exception at the start of the outbreak of the “beneficial” early changes in behaviour by some people in the North, which he said was in part a result of the measures which had been introduced in the Republic.

“The evidence we have from our test, trace and protect service is that only a very small proportion of our cases at present are associated with travel, so we don’t think that’s a significant driver at the moment in terms of increased case numbers.”

There is also, he said, “very good communication and collaboration with our colleagues in the Republic”, with conversations taking place at a minimum once a week, and contact tracing operating on a cross-border basis.

The number of coronavirus cases in the North has increased tenfold since early July, with most cases now among younger people. The reproduction – “R” – rate has been consistently above one since the beginning of August, and hospital admissions and bed occupancy figures have also been rising.

Over the weekend the North’s department of health reported 138 new cases, bringing the total number of cases since the beginning of the pandemic to 7,187.

Prof Young said he was “concerned” at the increase in case numbers, which he described as “steady and progressive and if anything is gathering pace”, and in particular in Belfast, where 134 cases have been identified in the last seven days.