Bowel, cervical and breast checks way behind due to Covid-19 restrictions 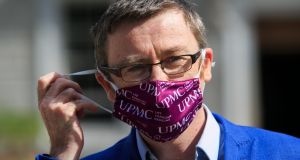 Fewer than 100,000 people were checked under the State’s three cancer screening programmes in the first half of the year due to Covid-19 restrictions, new figures reveal.

This compares to 500,000 people screened in all of 2019, and suggests that significantly fewer people will be screened for bowel, cervical and breast cancer this year.

The figures were released to Sinn Féin health spokesman David Cullinane, who said a “massive screening catch-up programme” was needed.

However, in a letter to Mr Cullinane, the National Screening Service said measures to protect staff and participants mean “we are unable to screen people at the same numbers we did pre-Covid-19”. The service said it was assessing capacity “to understand the impact of new processes and procedures”.

CervicalCheck, which recommenced at the start of July, screened 39,312 people in the first six months of the year, compared to 206,315 across all of 2019. Even if it were to screen people at last year’s average rate of 17,192 per month, it would still fall short of the 2019 total.

Similarly, BowelScreen saw 122,724 people in 2019 and 21,821 in the first half of this year. Some 38,153 people attended BreastCheck appointments in the first three months of the year, and there was no screening in April, May or June. Last year, 170,957 people were seen in the programme.

“The importance of catching cancer early is indisputable, and the Covid-19 pandemic has caused complications in delivering cancer care,” Mr Cullinane said. “While screening is not a diagnostic test, it is hugely important in our fight against cancer.”

A spokeswoman for the Irish Cancer Society said that screening, while indeed not a diagnostic test, was a “central plank” of Ireland’s cancer strategy.

“The impact of the pandemic is being layered on top of long-term challenges and waiting lists that pre-existed Covid. Government must commit to building a stronger, more sustainable cancer system that enables the provision of timely access to care for anyone who needs it,” the spokeswoman said.

There are different timelines for the restarting of the three services. In CervicalCheck those who were called for an early repeat appointment, or their first screening, were prioritised first, followed by those due routine screening.

Some 600 patients due colonoscopies under BowelCheck, which restarted in early August, have largely either had the procedures rescheduled or completed. BreastCheck is due to resume in September or October, with just over 100,000 invites to issue, which will be sent to those waiting the longest first. The Health Service Executive said it would take “some months” to catch up.