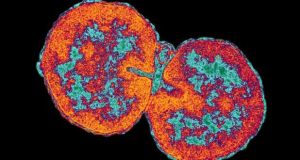 Meanwhile, the number of recorded cases of gonorrhoea also grew last year, by 15 per cent to 2,249, the Health Protection Surveillance Centre has found.

The number of syphilis cases reported to the HSE has risen to record levels, driven by increases in the incidence of the sexually-transmitted disease among both men and women.

There were 398 cases of early infectious syphilis last year, a rise of 31 per cent since 2016, according to the HSE’s Health Protection Surveillance Centre (HPSC).

Already this year, there have been 408 cases of the disease up to the start of November, more than in the whole of 2017.

The centre says the number of cases is the highest on record since enhanced surveillance of the disease began in 2000.

The increase was mostly in males, but researchers also noted a slight rise in female cases, in a trend mirrored in the UK and the US.

Four of the 16 women diagnosed with syphilis were pregnant; there was also one case of congenital syphilis in a male infant whose mother was visiting Ireland at the time of his birth. The boy was treated at birth and referred for follow-up upon return to his home country.

People with multiple syphilis reinfections may play an important role in the transmission of the disease, according to the HPSC, which says most of the reinfection cases involve people who are also HIV positive.

Meanwhile, the number of recorded cases of gonorrhoea also grew last year, by 15 per cent to 2,249. This represents a slowdown from 2016, when a 51 per cent increase was recorded.

Four out of every five cases were in males, and 60 per cent involved MSM where the mode of transmission of the disease was known. A slowdown in the increase of MSM cases is being attributed to outreach and education work in the gay community.

However, the overall figures mask a 71 per cent rise in cases in women, compared to just 7 per cent for male cases.

Globally, rising rates of gonorrhoea infection are causing concern because of the threat posed by untreatable forms of the disease.

The HPSC advises going for regular tests, using condoms, and reducing the number of sexual partners as the best ways to have safer sex.