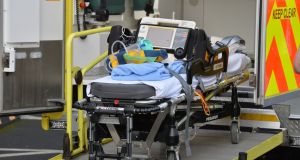 Seven out of every 10 patients who fracture their hip are operated on within 48 hours of being admitted to an emergency department, a new report shows.

The achievement of the 48-hour target varies from 92 per cent in St Vincent’s hospital in Dublin to 55 per cent in Cork University Hospital.

Most patients who have to wait longer do so for medical reasons, but in one in four cases, the delay is caused by a lack of operating theatre space or staff shortages.

Just 11 per cent were admitted to an orthopaedic ward within the target time of four hours, however, and big variations were recorded across the 16 acute hospitals, according to the report by the National Office of Clinical Audit.

The average wait for admission across all hospitals was 31 hours.

Only one in five hip fracture patients were discharged home directly following surgery, according to the Irish Hip Fracture Database 2017 report. About one-third were sent for rehab and another third to convalescent or nursing home care.

The purpose of the database is to encourage standardisation of the care of hip fractures and to improve outcomes for patients. Last year in Ireland, 3,608 patients aged 60 and over were hospitalised following a hip fracture, leading to ongoing complications and death, and high health-care costs.

“Every day in Ireland, 10 people break their hips,” Dr Emer Ahern, clinical geriatric lead for the database, pointed out. “Only one in five go home directly from hospital. There has been huge progress in hip-fracture care in Ireland in the past 10 years and we will continue to use the data we collect to continually improve the care and outcomes for our patients.”

Pressure ulcers are a common complication arising from hip fractures, but 14 hospitals succeeded in reducing their incident, according to the report.

Half of all patients were reviewed by a geriatrician in hospital and three-quarters received a bone-health assessment to prevent further fractures.

Earlier this week, The Irish Times published a major report on the DePuy metal hip, which was introduced in 2004 and withdrawn in 2010. There are currently more than 1,000 cases before the High Court from Irish patients seeking damages arising from the controversial new product.