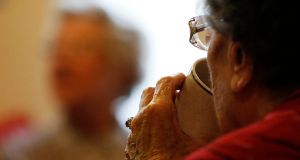 The findings come from the Irish Longitudinal Study on Ageing study, which has been tracking more than 8,000 over-50s for the past seven years. Photograph: Jonathan Brady/PA Wire

Older Irish people’s quality of life increases with age and peaks at 68, before starting to decline gradually, according to new research.

Social factors, notably a person’s ability to maintain social networks and activities, provide the main influence on quality of life, though health-related factors such as functional limitations are also important.

Women, and those living in rural areas, are best-placed to enjoy continuing high quality of life into old age thanks to their superior social networks, the study by scientists at Trinity College Dublin finds.

Women aged over 50 are twice as likely as men to report positive supportive relationships. This, the report says, means they are more likely to have a higher quality of life.

Meanwhile, 55 per cent of those surveyed in rural areas reported high social cohesion, compared to just 19 per cent in Dublin. Connectedness and solidarity within neighbourhoods is seen as playing an important role in determining public health.

The findings come from the fourth wave of data from the Irish Longitudinal Study on Ageing (Tilda) study, which has been tracking more than 8,000 over-50s for the past seven years.

Social interactions play an important role in suppressing unwanted inflammation which is part of the ageing process, according to the study’s lead academic, Prof Rose-Anne Kenny of TCD.

“This report provides evidence for high rates of volunteering amongst the over-50s and the benefits that volunteering, social engagement, supportive friendships and membership of organisations have on physical and mental health and wellbeing,” she says.

“Quality of life continues to improve with age and more so if social engagement is strong, including for persons who have significant disabilities, who experience better quality of life and mental health if their relationships are strong.”

Almost three-quarters (74 per cent) of older adults participate in active and social leisure activities each week, while 52 per cent participate in organised groups such as sports groups, book clubs, or charitable organisations. However, retirement was not immediately linked to an increase in volunteering or social participation.

Isolation is increasing, with 11 per cent of participants categorised in the lowest of four categories of social integration, the study found.

Many have remained physically inactive over the years of the survey; 45 per cent do not get the recommended minimum 150 minutes a week of exercise.

Older women are smoking less and are less likely to have problematic alcohol use (9 per cent, against 15 per cent for men).