Tánaiste: People no more likely to get virus in ‘green list’ countries than here 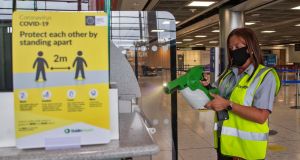 Tánaiste Leo Varadkar has said the Government is examining the possibility of bringing in random coronavirus testing for people travelling to Ireland from countries where the virus is not under control.

Mr Varadkar said on Tuesday that mandatory quarantine for people travelling to Ireland from countries regarded as high risk for Covid-19 has not been ruled out but he was not sure if mandatory testing was practicable.

That list is due to be finalised in the coming days ahead of the scheduled start of phase four of Covid-19 restrictions on July 20th. However, acting chief medical officer Dr Ronan Glynn warned on Monday that the National Public Health Emergency Team (Nphet) would not necessarily recommend moving to the final phase of the country’s reopening, under which all pubs can resume trading. “I think we are concerned about the increase in cases over the last five days,” he said.

The Government plans to produce the “green list” next week of countries that people can travel to without restrictions, Mr Varadkar added, “because you are no more likely to get the virus there than here.”

For countries not on the “green list” or “A list”, the Government is examining the possibility of “bringing in random testing or testing in some cases as other countries have done because we know that mandatory quarantine is not possible in Ireland.”

Mandatory quarantine would not be legally sound, he said. “We’ve seen for example in Australia it worked out very badly where the hotels where people have been detained have turned out to be clusters or sources of infections themselves.”*

At present people arriving into Ireland from abroad must by law fill in a form called the Covid-19 passenger locator form and can be jailed or fined if they do not or if they provide false information. However, mandatory quarantine is not part of the measure.

Sinn Féin leader Mary Lou McDonald said that tourists should be told “don’t come this season” and that anyone arriving in the country should face mandatory 14-day quarantine.

The island of Ireland cannot be left exposed and it was not enough to accept “on a wing and prayer” that people were self-quarantining, Ms McDonald told RTÉ radio’s Today with Sarah McInerney.

Ms McDonald said that experts need to come up with alternatives and she accepted that tests produced false negatives. “I was that person myself.”

Relying on a paper trail and making phone calls to verify where the person was, was not enough. Ms McDonald said she was in favour of every precaution necessary being taken to “protect our island.”

Community transmission now appeared to be under control and the issue was the virus being brought into the country, she said. All the necessary checks at ports and airports should be taken to keep the island totally safe. For epidemiological purposes the island of Ireland was a single unit, she said.

Ms McDonald said the UK should be considered a “red” list because it continues to have problems with the virus. “It has to be on the red list. This is not a political decision, it is an issue of biology and health.”