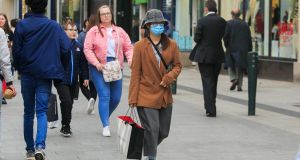 Significant numbers of people identified as close contacts of confirmed cases of coronavirus are refusing to present for testing, a briefing of the National Public Health Emergency Team has heard.

“We know a significant portion of people who have been identified as contacts and have been offered testing are not coming forward for testing,” acting chief medical officer Dr Ronan Glynn said on Monday evening.

“Testing is the foundation stone of everything we do in relation to this disease,” he added. “If we don’t know how many people have it, if we don’t know where it’s spreading, we can’t stop it. So if you’re asked to get a test, please do so”.

Nphet reported 11 new cases and no new deaths from the virus on Monday evening. However, Dr Glynn cautioned against assuming Nphet would recommend moving to the final phase of the country’s reopening on July 20th, under which all pubs can resume trading. “I think we are concerned about the increase in cases over the last five days,” he said.

There have been 99 additional cases in the last five days, as the country continues to reopen from lockdown. “We’re not sounding an alarm but we’re certainly watching this really, really closely,” he said.

Echoing comments from Minister for Foreign Affairs Simon Coveney, Dr Glynn said “now is not the time to travel to Ireland”, adding Irish people should also not travel abroad unless “absolutely necessary”.

Reports of tourists failing to quarantine upon arrival in Ireland were a “concern,” he said. From a public health perspective, a “mandatory quarantine would clearly be a desirable measure”, but the Government had to account for other factors, Dr Glynn said.

The median age of the 165 confirmed cases in the last two weeks was 31, with just under half of those occurring in Dublin. Some 12 per cent of these new cases were travel-related.

He added: “Our research shows that 38 per cent of the population now believe the worst of the pandemic is ahead of us. This does not have to be the case. Simple measures like hand washing, physical distancing, face coverings in appropriate settings, cough/sneeze etiquette and watching out for symptoms are the crucial elements in suppressing Covid-19.”

The research conducted on behalf of the Department of Health shows 55 per cent of the population now self-report to wearing face coverings.

The nationally representative sample of 1,900 people conducted on behalf of the Department of Health also reveals: