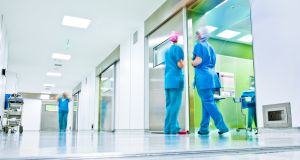 The Minister for Health has previously said doctors and nurses could opt out of providing abortion services, but that they must refer the woman on. File photograph: Getty Images

More than 350 nurses and midwives have urged Minister for Health Simon Harris to open talks on provisions for conscientious objection in the forthcoming abortion legislation.

Mary Fitzgibbon, a nurse and midwife, said the group – who have signed a petition – want the right to object to providing services due to conscience. But they also believe they should not have to refer a woman on to another healthcare professional.

Mr Harris has previously said doctors and nurses could opt out of providing the services, but that they must refer the woman on. Ms Fitzgibbon said that those who signed the petition have a “conscientious commitment to life. We respect and defend the dignity of every stage of human life and we have a responsibility to make every valid or reasonable effort to protect the life and health of pregnant women and their unborn babies,” she said.

“For us, as nurses and midwives, participation in termination of pregnancy . . . is morally objectionable and conflicts with our conscientious commitment to life,” added Ms Fitzgibbon.

She said that participation includes “supervision, delegation, planning or supporting of staff involved in termination pregnancy”.

“We don’t want to be discriminated against by our employers or victimised as employees in exercising” that right, she said. While 367 registered nurses have signed the petition, there are more than 65,000 nurses and midwives employed countrywide.

Margaret McGovern, a nurse working in general practice, said the forthcoming legislation was the “elephant in the room. Many people are afraid to speak up and afraid of what lies ahead.”

So what is happening?

The director of social policy and regulation for the Irish Nurses & Midwives Organisation, Edward Matthews, previously said that nurses and midwives are afforded the same protections as medical practitioners concerning conscientious objection when carrying out a termination.

Ms Fitzgibbon said she wanted to see discussions at ward level with clinical managers around the this issue.

“That is not happening. None of us have had these conversations,” she said. Ms Fitzgibbon called on Mr Harris to address such concerns.

Meanwhile, Independent TD Michael Healy-Rae railed against claims that certain groups of TDs are trying to delay the legislation which will be debated this week.

“Today a spokesperson for a political party came out and accused pro-life TDs of holding up the legislation and accused us of delaying tactics. Now absolutely nothing could be further from the truth,” said Mr Healy-Rae He said that, at committee stage, the anti-abortion TDs spoke for a minimum amount of time.

“They just made their points as legislators which they are entitled to do. We are doing what we are supposed to do as legislators and that is ask questions. We all know who is losing in all of this,” he said.