Union says some doctors earning up to €60,000 less than colleagues appointed after 2012 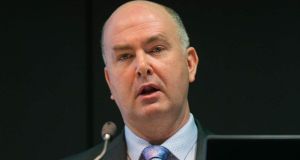 The Irish Medical Organisation has warned it may take industrial action in the New Year over the two-tier pay system for hospital consultants.

The union has called on Minister for Health Simon Harris to establish a process to resolve the issue and says failure to enter into talks will result in a ballot for industrial action.

“Call doctors in for talks or the IMO will call doctors out on industrial action, is the simple and stark message from doctors in the IMO to the Minister for Health,” IMO president Dr Peadar Gilligan said.

Consultants employed after October 1st, 2012, are paid 30 per cent less than colleagues employed before that date, in accordance with cost-saving measures introduced by the Government at the time.

This cut was on top of a 10 per cent reduction imposed on all new entrants to the public service before that date, Dr Gilligan pointed out.

The 30 per cent cut has since been ameliorated following talks with the union but the IMO says hundreds of consultants in Irish hospital are working alongside colleagues doing the same work but earning between €30,000 and €50,000 less.

As a result, “morale is being undermined”.

“Vacant posts are proving impossible to fill with few or no applicants for what would have been previously considered highly sought after senior medical posts,” Dr Gilligan said.

The cut “has resulted in hospital services being compromised, longer waiting lists for our patients and an unsustainable shortage of consultants with 500 vacant posts currently in the system. This number of vacant posts is steadily increasing as more consultants retire or resign from the public system.”

Two-thirds of IMO members who took part in a recent survey indicated they would take industrial action to force the Government to address the issue, he said.