Vaginal mesh devices should not be first treatment for prolapse in women, report finds

Many women in Ireland are experiencing medical complications because of a surgical mesh that has been used in procedures for over fifty years. David Taylor, Professor of Materials Engineering TCD explains. Video: Bryan O’Brien 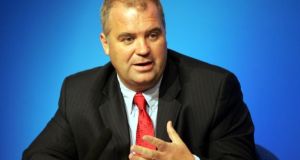 Chief medical officer of the Department of Health, Dr Tony Holohan was asked by Minister for Health Simon Harris to draw up a report on mesh devices last July. File photograph: Eric Luke

Vaginal mesh devices should not be used as a first-line treatment of prolapse in women, according to a report by the chief medical officer of the Department of Health.

Mesh devices are associated with significant and severe complications in a minority of women, and this is of concern given the difficulties of removing them, the report by Dr Tony Holohan states.

Dr Holohan was asked by Minister for Health Simon Harris to draw up the report last July after British authorities enforced a pause on the use of vaginal mesh devices and groups representing women who used the product alleged painful and chronic complications.

A similar pause ordered by the Minister in Ireland is to remain in place until the recommendations in Dr Holohan’s report are implemented, according to Mr Harris.

“A pause remains on the use of mesh procedures, pending confirmation by the Health Service Executive that the key recommendations have been implemented,” he said when publishing the report on Wednesday.

“I have already committed to meeting again with Mesh Survivors Ireland to discuss the report and I look forward to doing that in the coming weeks.”

Dr Holohan’s report finds there is an evidence base to support the use of mid-urethral sling (MUS) mesh devices in the treatment of incontinence and, separately, the use of abdominally placed mesh in the management of prolapse.

“A significant majority of patients benefit greatly from these procedures, with reduced long-term complications and improved functional outcomes compared to non-mesh procedures,” the report states.

The report says mesh implants should only be offered following assessment and after detailed discussion with the patient about the associated risks and benefits and alternative treatment options.

“The use of TVMIs for the treatment of POP specifically is no longer regarded as appropriate first line treatment internationally,” the report states, adding that that the HSE should develop protocols to ensure their use is restricted to the management of complex POP cases, where other treatment options have failed or are not appropriate, and where patients are fully informed.

The report makes 19 recommendations on the development of patient information and informed consent materials; surgical professional training and multi-disciplinary expertise in units carrying out mesh procedures; and ensuring timely, appropriate and accessible care pathways for the management of women with complications.

A significant number of these recommendations are already underway by the HSE, according to Mr Harris.

Members of the Mesh Survivors Ireland group met the minister last June to call for a suspension of the mesh device and to discuss how the treatment of women suffering from SUI or POP could be improved.

On Wednesday, Minister Harris said: “The bravery, commitment and dignity shown by these women in sharing what were harrowing, deeply personal experiences are acknowledged and appreciated. The telling of their stories makes public what heretofore was often a private suffering.”

Surgical mesh is a medical device made from a synthetic material has been in use since the 1950s to repair abdominal hernias and since the 1990s in treating male and female SUIs, female POPs and bowel disorders.

POP, which affects women who have given birth, is when one of more of the organs in the pelvis slips down from their normal position and bulge into the vagina. SUI is the unintentional loss of urine and occurs when the muscles that support the bladder weaken.

The report says it is widely accepted that for many women suffering incontinence, the use of mesh devices has provided a more effective and less invasive form of treatment than traditional surgical procedures.