What happened in the Kilmichael and Narrow Water IRA attacks? 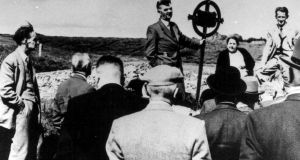 Tom Barry addressing former IRA colleagues at an annual commemoration of the Kilmichael ambush which took place 100 years ago on November 28th, 1920.

Sinn Féin TD Brian Stanley became embroiled in controversy over the weekend after posting an “insensitive” tweet about IRA attacks during the War of Independence and the Troubles.

On Saturday, the Laois-Offaly TD tweeted in reference to the Kilmichael ambush in 1920 and the Narrow Water massacre in Warrenpoint, Co Down, in 1979, claiming they were “the 2 IRA operations that taught the elite of d British army and the establishment the cost of occupying Ireland. Pity for everyone they were such slow learners”.

Mr Stanley later apologised and deleted the tweet describing it as “inappropriate and insensitive”.

The events of August 27th, 1979, the day of the Narrow Water killings, have resurfaced recently with the first episode of the new series of The Crown which focuses on the assassination of Lord Louis Mountbatten by the IRA.

Given Mountbatten’s closeness to the British royal family and his status as the last viceroy of India, his assassination overshadowed the even deadlier attack carried out on that day by the IRA.

It is, as the name suggests, a narrow stretch of water near Newry. Crucially, it is also on the Border between the Republic and Northern Ireland and it is most likely that the site was chosen to allow for the remote detonation of the bombs from the Republic.

The centenary of the Kilmichael ambush, in which 17 British soldiers were killed in west Cork, was on Saturday. Narrow Water and Kilmichael were respectively the worst military reverses for the British army in the Troubles and the War of Independence and both saw a radical rethink of British security policy in Ireland.

Narrow Water remains the largest single loss of life suffered by the British army since the second World War.

Seven soldiers were killed when a bomb hidden in a lorry load of straw was detonated by remote control as soldiers from the Parachute Regiment drove past on the dual carriageway between Warrenpoint and Newry. Five more soldiers were injured in the blast.

The second explosion followed 20 minutes later and targeted reinforcements which had rushed to the scene.

The bomb was hidden in a gate lodge opposite Narrow Water castle. It killed 11 soldiers including Lieut Col David Blair, the commanding officer of the Queen’s Own Highlanders – the highest ranking officer killed in the Troubles to that date.

A total of 16 from the Parachute Regiment and two men from Queen’s Own Highlanders died at Narrow Water.

The attack was condemned widely on both sides of the Border and in the UK, but many in republican communities were satisfied that the Parachute Regiment had been targeted as they were responsible for the killings of 11 civilians in Ballymurphy over a two-day period in 1971 and also on Bloody Sunday in Derry in 1972.

It gave rise to a notorious piece of republican graffiti. “Thirteen dead but not forgotten. We got 18 and Mountbatten”.

Nobody was ever charged or convicted with the Narrow Water ambush. Two IRA activists, Joe Brennan and Brendan Burns, were arrested, but never charged.

Unlike those responsible in the Provisional IRA ambush at Narrow Water, the men responsible for Kilmichael risked their lives in that attack.

Three of them were killed when an IRA column ambushed a party of Auxiliaries on November 28th, 1920.

The British troops then were also travelling in two lorries when attacked, but that is where the similarities with Narrow Water end.

Kilmichael involved a prolonged shootout in which 16 of the 18 Auxiliaries were killed. Another escaped, but was captured and killed on the following day. One, who was left for dead, survived with severe injuries.