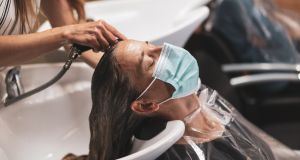 Hairdressers, barbers and other non-essential retail outlets will reopen on Tuesday as part of the Government’s plan to loosen current restrictions for the Christmas period. Photograph: iStock/Getty Images

Most hairdressers are “fully booked” for the month of December, the Irish Hairdressers Federation has said.

Hairdressers, barbers and other non-essential retail outlets will reopen on Tuesday as part of the Government’s plan to loosen current restrictions for the Christmas period.

Danielle Kennedy, president of the Irish Hairdressers Federation, said the majority of hairdressers were booked out for the coming weeks with appointments confirmed in the days before the Government’s announcement on Friday.

“December is always our busiest month of the year anyway but this year we’re down capacity as well so I suppose it will be the case that not everyone will get looked after over the next couple of weeks so they’ll just have to bear with their salons for possibly a little bit longer,” Ms Kennedy said.

“Most are doing longer opening hours, generally at Christmas most stylists work extra days. As we’re a female-dominated industry we would have a lot of mams that work part time and then at Christmas time those members work a few extra hours.”

Ms Kennedy said her salons in Wexford and Waterford were “95 per cent booked” for the month of December.

“It’s going to be a very busy few weeks but I think we feel much more prepared going into it this time. We’ve been down this road before, we’re prepared for the busy few weeks, we’re very familiar with the health and safety protocol and know how to operate in that very safe manner, very comfortably,” she said.

“The last few weeks have been tough and there was always that question of were we going to get back open in time for Christmas and thankfully we are.”

Ms Kennedy said the federation would be campaigning for hairdressers to remain open if tighter restrictions are reintroduced in January.

“If we go into Level 4 we would be pushing for salons to remain open. We will be campaigning for that over the next while and lobbying for it.”