Chronic pain: ‘I can’t move or walk properly, spend most of my time in bed’ 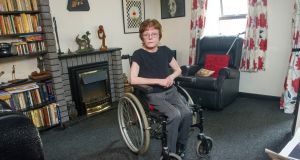 Delores Dowling from Cork city. She is calling for a public inquiry and criminal investigation into MoM hips. Photograph: Daragh Mc Sweeney/Provision

In 2007, Delores Dowling underwent double hip-replacement surgery. She was implanted with metal-on-metal (MoM) DePuy hips that years later would be subject to an international recall due to high failure rates.

Dowling was suffering from avascular necrosis – death of bone tissue due to interruption of blood supply – and required hip surgery.

In 2008, due to continuing pain, revision surgery was undertaken in her right hip and the original device was removed and replaced with another MoM hip, the Birmingham Hip Resurfacing (BHR) System.

Dowling would later learn that in 2015 three of these products had been were withdrawn from the market, with a field safety notice advising “use of BHR in female patients is to be contraindicated”.

But despite three hip surgeries to date, her pain has only increased while her mobility has decreased.

“I feel as if there’s something moving in my right leg,” she says.

She suffers from reflex sympathetic dystrophy (RSD), also known as complex regional pain syndrome, which has no known cure. It causes severe burning pain, skin sensitivity, changes in skin temperature and changes in skin colour, among other symptoms. She says she also has tinnitus, vertigo, chronic fatigue and vision problems.

She says that for many years she has had to go upstairs backwards on one leg due to chronic pain. “I can’t move or walk properly and spend most of my time in bed,” she says.

She continues to suffer from chronic pain and severely limited mobility in her legs. Her last social outing occurred 10 years ago when she went to see Leonard Cohen in concert.

“Because of the pain I had to go to the concert lying on a mattress in the back of a van. I have not been out socially since,” she says.

Dowling, who uses a wheelchair, claims that concerns regarding defective hip implants and toxic side effects from the metal alloy cobalt chrome have been wilfully ignored by authorities for years.

She is calling for a public inquiry and criminal investigation into MoM hips.

She is also gravely concerned at what she believes are astonishingly low settlements in DePuy class actions suits in Canada and Australia, with some victims receiving payments as low as $33,000.

1 Covid-19 incidence in the Republic set to surpass that of UK
2 Coronavirus: Non-essential travel from US set to be banned within days
3 Taoiseach tested twice for Covid-19 but excused quarantine after Brussels trip
4 ‘Our hearts are broken’ – implications of fresh lockdown sink in
5 Motor dealer outlines EV reality on sales front
Real news has value SUBSCRIBE