Up to 24 medical negligence cases since 2002 include confidentiality clause 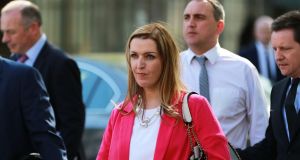 Vicky Phelan refused to sign a gagging clause so as to allow other affected women to be told. Photograph: Nick Bradshaw

Confidentiality clauses have been stitched into as many as 24 medical negligence cases settled out of court over the past 15 years, the State Claims Agency director has said.

Appearing before an Oireachtas committee, Ciaran Breen said there were “perhaps two dozen” clinical cases where settlements were made with a condition that the patient did not reveal the circumstances involved.

The number of cases involving gagging clauses since the Health Service Executive (HSE) adopted a policy of open disclosure has been “virtually nil”, he added.

The HSE’s open disclosure policy, official guidelines on telling patients and their families when something has gone wrong in their healthcare, was adopted just five years ago but it is not mandatory.

Cian O’Carroll, solicitor for Vicky Phelan, who exposed the CervicalCheck scandal, said there are potentially other scandals lurking behind the dozens of confidentiality agreements.

“I can say that on the basis that I personally strongly suspect that there is a very significant scandal lurking behind the BreastCheck figures,” he said. “That is the starting point, after that whatever else is there has yet to be uncovered.”

Mr O’Carroll said BreastCheck “tacitly admitted” in recent weeks there are concerns over potential missed diagnosis in its screening programme.

Prof Ann O’Doherty, national clinical director of the programme, told an Oireachtas committee last month that she had received 15 solicitors’ letters within two weeks over legal issues, when she would normally only get one a year. She said she feared spiralling legal costs could lead to the screening service being shut down.

Mr O’Carroll, who represents a number of concerned women who have contacted BreastCheck seeking their records, said any settlements would come from the State Claims Agency and not from a cancer screening programme. “It may well be that some of the 24 cases involving confidentiality clauses relate to BreastCheck.

“They should come out now and start notifying the women where they have knowledge of significant delay in diagnosis and treatment.”

Mr O’Carroll added that it would be “immoral” not to inform women and families where there was such knowledge.

Appearing before an Oireachtas committee on finance, public expenditure and reform, Mr Breen said “up to when we started to espouse open disclosure as the proper thing to do, there were probably occasions where confidentiality clauses were put into settlements”.

“Without going back over individual cases, I am guessing that, of the 8,500 clinical cases we have resolved, no more than a dozen and a half or perhaps two dozen were in that category over all those years.”

Mr Breen said the period he was referring to was from 2002 onwards.

The cervical cancer scandal was exposed when Ms Phelan, who is terminally ill, refused to sign a confidentiality clause as part of a €2.5 million High Court settlement with US-based Clinical Pathology Laboratories, which missed her cervical cancer during a 2011 smear test carried out by CervicalCheck.

Ms Phelan (43) was diagnosed with cancer three years later and a 2014 audit showing her original smear test to be inaccurate was withheld from her by CervicalCheck until September 2017.

She refused to sign a gagging clause so as to allow other affected women to be told.

Mr Breen said the State Claims Agency had opposed the use of a confidentiality clause in Ms Phelan’s case.

Asked for a response yesterday afternoon, a spokeswoman for the HSE said it would need more time to consider the issues raised so as it could answer in a meaningful way.