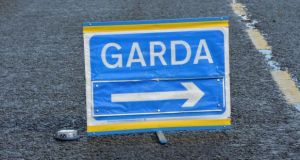 Gardaí appealed for witnesses to contact Buncrana Garda Station on 074-9320540.

A motorcyclist has died following a collision with a car in Buncrana, Co Donegal.

The man in his 50s was killed when his motorcyle was involved in a collision with a car at Castleforward, on the main Burnfoot to Buncrana Road (R238) at 5.30pm on Wednesday.

He was taken to Altnagelvin Area Hospital in Derry and was pronounced dead a short time later.

The male driver of the car was not injured.

The coroner has been notified and a post-mortem examination will be carried out.

The road is currently closed to facilitate Garda forensic collision investigators and diversions are in place.

Gardaí appealed for witnesses to contact Buncrana Garda Station on 074-9320540, the Garda Confidential Telephone Line 1800 666 111 or any Garda Station.

A total of 79 people have died on Irish roads so far this year, including four motorcyclists, six cyclists, 18 pedestrians, 12 vehicle passengers and 39 drivers.

The number of road deaths is up slightly on last year when, by July 2017, 75 people had died in traffic incidents.