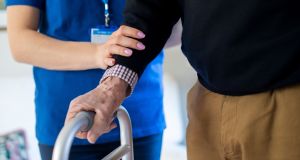 Residents are required to make a means tested contribution towards the cost which is subsidised by the HSE. Photograph: iStock

An extensive review of the Fair Deal nursing home scheme begun over two years ago was “paused” because of problems in accessing key information deemed sensitive under data protection laws.

Formally titled the Nursing Homes Support Scheme, Fair Deal was established in 2009 to provide financial support for those in private or public nursing home care.

Residents are required to make a means tested contribution towards the cost which is subsidised by the HSE.

In March 2018, at the request of the Oireachtas Public Accounts Committee (PAC), a value for money review was established to examine the variance in cost in public and private setting and was due to be completed last year.

However, addressing the PAC on Thursday, Colm O’Reardon, acting secretary general at the Department of Health, said it had run into legal problems.

“We share your frustration about that issue, it is an important piece of work,” he told Social Democrats TD Catherine Murphy who had queried the delay.

“The original plan was to go to the NTPF [National Treatment Purchase Fund which sets maximum prices in private care] and use their data sources and that ran into data protection issues and legal discussions and all of that.”

Mr O’Reardon said an alternative approach was eventually agreed to access relevant data via the industry body Nursing Homes Ireland (NHI), one that was “not easily arrived at”.

“Things had actually been paused because of the scale of the data problems,” he said.

A recent report by the Comptroller and Auditor General (C&AG) found that in 2018, the average charge for public nursing homes was €1,564 a week, compared to the average maximum price for private homes of €968 a week, a difference of 62 per cent.

However, Comptroller Seamus McCarthy noted that because differing methods are used to determine weekly rates in each sector, a “meaningful comparison” was difficult to arrive at, and referenced the ongoing review.

HSE chief executive Paul Reid, in his opening remarks to the PAC, acknowledged the variance in costs with public centres “generally having a higher cost”.

“There are a number of key factors driving this variance, including pay related issues, with generally higher staff pay rates and conditions at public nursing homes, as well as higher staffing ratios.”

Fine Gael TD Alan Dillon pointed out that in 2018, 33 per cent of the entire Fair Deal budget was given to HSE run homes which cared for just 20 per cent of all residents in long term care.

Wexford Independent TD Verona Murphy said she was aware that in her county a public bed was costing almost €1,600 compared to €910 for a private bed about 15km away.

“There shouldn’t be any disparity in relation to the calculation of costs of providing that service,” she said.

The committee heard that this year, additional investment of over €70 million has brought the scheme’s total annual budget to over €1 billion for the first time, supporting over 24,000 people. A further €90 million has been made available to cope with potential Covid-19 outbreaks.

According to the C&AG report, the annual number of applications for the scheme is about 10,000.