Coronavirus: Almost half of Irish people believe the worst ‘is ahead of us’ 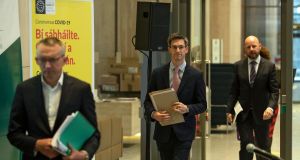 As the numbers of people infected grows, public fears about a second wave of coronavirus and support for more stringent restrictions have grown this month, according to public opinion research published by the Department of Health.

Research carried out last week and published on Monday night shows the numbers in favour of further restrictions surpassed those against such a move in recent weeks, rising to more than half (52 per cent) of all respondents to the poll. The numbers of those opposed to more restrictions fell to under a third (29 per cent) – meaning that a significant majority of those who expressed a view favour further restrictions.

There has been a similar movement in recent weeks in the numbers of people who believe the measures introduced by the Government are “insufficient” – it rose from 30 per cent to 39 per cent during the period in question. More than half of people (54 per cent) say the response has been appropriate; only 7 per cent say it has been too extreme. Almost half of respondents (47 per cent) say the worst is “ahead of us”.

Levels of worry in the population are similar to those seen at the height of the Covid-19 pandemic in April, the research says.