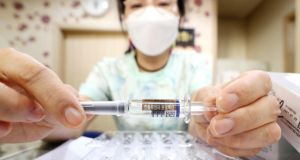 A nurse shows a flu vaccine at a clinic in Seoul, South Korea. Photograph: Yonhap/EPA

The threat of a “twindemic” caused by both Covid-19 and influenza outbreaks this winter might not be as serious as first thought, following record low numbers for influenza cases in the southern hemisphere.

Countries including Australia and New Zealand have had some of the mildest flu seasons on record, with the number of cases at a fraction of previous years.

Precautions such as mask-wearing, hand-washing and social distancing used for Covid-19 mitigate the impact of flu. In addition, the dramatic drop in air travel has also curbed the spread of the seasonal flu globally.

The state of Queensland in Australia, which has a population of roughly the same size as Ireland at five million, has recorded less than 6,000 flu cases during 2020, only a fifth of the mean of 32,834 over the past five years.

The majority of those cases were recorded in the first three months of the year, before Covid-19 hit. The data since March show that cases of flu fell to negligibly small numbers during the antipodean winter.

Dr Orla Ní Choinmhide, originally from Kildalkey, Co Meath, but now practising as a GP in Queensland, said she had encountered no flu cases at all this year in her surgery. “None of my patients presented with flu this winter, whereas last year and the year before, we would be swabbing five to 10 cases each week.”

Prof Paddy Mallon, a specialist in microbial and infectious diseases at UCD said the experience in those countries gave some cause for optimism.

“What is apparent from the data on the 2020 flu season emerging from the southern hemisphere is that there is a real opportunity for us as a society to blunt the impact of the upcoming flu season in Ireland.

“With continued focus on hand-washing, physical distancing and mask wearing, the hope would be that the spread of flu within our community could be reduced.

“This could help in two ways. It could reduce the risk of transmission of flu to more vulnerable people and therefore limit the impact of flu on our healthcare system, but also could reduce the pressure on our Covid-19 testing programme so that it is not swamped by people with flu symptoms who need to have Covid-19 infection ruled out.”

Prof Sam McConkey of the Royal College of Surgeons in Ireland said that during the latter period of restrictions the levels of viral infections in Ireland “dropped lower than I have ever seen”.

He said: “A little of that could be under-reporting, as we were not attending our GPs, but I think that it was also real.”

He said he personally would “rather have the flu vaccine instead of the restrictions, if it were a straight choice”.

Another expert in the field of infectious and viral diseases, Prof Jack Lambert of the Mater hospital said a vigorous and robust flu vaccine campaign was still required. “The saving grace is if we religiously use masks for Covid we won’t have the same fallout from other respiratory diseases like flu,” he said. He asked if the Government could achieve its ambitious plan of extending free vaccination to a wide section of the population.

The Health Service Executive said more than two million vaccines had been ordered for its winter campaign. In relation to the possibility of the flu threat being mitigated, a spokesman said the service was taking “absolutely nothing for granted”.