Couple terminated pregnancy after receiving incorrect results from such a test 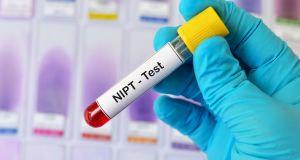 The tests rely on samples of the baby’s DNA in the mother’s blood to gauge the risk of genetic conditions, rather than testing the foetus directly. Photograph: iStock

Prenatal testing of babies in the womb is a multibillion euro global industry that has grown massively in the past decade after the development of new blood tests that can be performed early in pregnancy and do not impact on the health of the foetus.

Within the past four years they have taken off in Ireland, where private clinics offer non-invasive prenatal tests for a fee of about €500.

They are also attracting increased scrutiny, particularly after a couple attending the National Maternity Hospital received incorrect results earlier this year. This is possible because the tests rely on samples of the baby’s DNA in the mother’s blood to gauge the risk of genetic conditions, rather than testing the foetus directly.

The couple attending a private clinic at the hospital terminated their pregnancy in the hospital after a non-invasive test, and the initial results of a second, invasive test wrongly indicated the baby had serious anomalies.

But when the full results of the second test arrived after the termination, they revealed no genetic condition was present.

The case has raised questions about the accuracy of these tests, the way they are marketed and the information and support provided to women, particularly those at high risk of giving birth to a baby with a fatal foetal anomaly.

Non-invasive tests can provide reassurance to pregnant women at a worrying time, but they are not diagnostic tests and, if not properly explained, too much credence may be given to their findings.

“I shudder to think that there might be other cases where women have terminated their babies based upon screening tests which have falsely indicated a fatal foetal anomaly,” says Caoimhe Haughey, the solicitor representing the couple in the case.

In the UK, the Nuffield Council on Bioethics has been raising concerns about non-invasive tests since 2017. These include the misleading use of statistics; poor information about the genetic conditions being tested for; the offering of tests for conditions where the accuracy is low or unknown; and a lack of follow-up support.

Nuffield Council’s assistant director, Catherine Joynson, says many of these issues appear to be relevant to Ireland, based on her examination of websites offering non-invasive tests in the Republic.

Ms Joynson says the information provided to women having these tests needs to be accurate, neutral and supportive, so they can make informed choices.

One of her main concerns is about the claims made for the reliability of non-invasive tests. She says it is “not untrue” to claim, as many Irish clinics do, that the test is “99 per cent accurate”, but warns this is not the full story.

Some companies give people’s results as being ‘positive’ or ‘negative’, which is highly misleading or, at best, confusing

“Most people would assume this means their result will tell them pretty much for sure whether their foetus has one of the conditions or not. But as the conditions affect less than 1 per cent of all children born, a dummy test that gave everybody a low chance result would be 99 per cent accurate.”

She says a more helpful statistic is one known as the positive predictive value. “Sometimes, a test gives a high-chance result when the foetus does not actually have the condition.”

So where a woman received a high-chance result for Down syndrome, there is a 20 per cent chance it is wrong, and for Edwards syndrome the figure is 60 per cent.

The only way to be sure is to take a diagnostic test such as amniocentesis, she says. Amniocentesis can only be taken later in pregnancy and carries a small risk of miscarriage. “Some companies give people’s results as being ‘positive’ or ‘negative’, which is highly misleading or, at best, confusing.”

Ms Joynson is critical of what she says is “insensitive language” used by some Irish clinics on their websites, and an emphasis on negative features of genetic conditions. She takes issue with references to the “risk” of babies being born with anomalies as well as sentences such as “the majorities of babies are normal”.

The life expectancy of people with Down syndrome has greatly increased, she points out, as has their quality of life.

It took two years of campaigning by the Nuffield centre to effect change in the UK, where the Royal College of Obstetricians and Gynaecologists will soon publish guidelines on non-invasive tests.

In Ireland the recent controversy has belatedly raised awareness about the issues involved. The head of the HSE women and infants health programme, Dr Peter McKenna, circulated the Nuffield centre’s concerns to the State’s maternity hospitals when telling them to ensure more information was provided to women.

The profession, meanwhile, seems to be open to reforms. “The Institute [of Obstetricians and Gynaecologists] is conscious of the need to develop guidelines to deal with a changing scientific and clinical landscape and will work with the HSE to achieve this,” a spokeswoman said.