Recording of reason for delay in performing surgery needs to be improved, study says 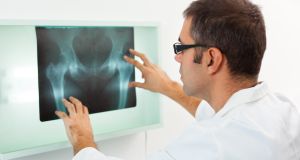 In one quarter of cases where the target was not met, no reason was provided by a hospital for the delay in operating. Photograph: iStock

More than a quarter of patients who fracture their hip have to wait over two days for surgery, according to the annual report of the Irish Hip Fracture Database.

Hip fractures are the most common injury suffered by older people and, in the vast majority of cases, early surgery is the best and safest way to treat patients.

With only 72 per cent of patients receiving surgery within 48 hours, the report says the recording of the reason for delay in performing surgery needs to be improved.

The big Dublin hospitals performed best in ensuring patients were operated on quickly, but in Limerick and Waterford hospitals, barely half of patients had surgery within the 48-hour target time.

In one quarter of cases where the target was not met, no reason was provided by a hospital for the delay in operating. Most of the delayed patients were recorded as “awaiting review, investigation or stabilisation” while the rest were forced to wait for space on the theatre list or orthopaedic diagnosis or investigation.

Generally, care is improving, according to the report, with patients being admitted, and receiving specialist assessment, more quickly.

The report tracks the care provided to 3,751 patients aged 60 years or over who were hospitalised following a hip fracture – 99 per cent of all affected patients. Hip fractures have significant consequences for society and for individuals, as they may affect their mobility and function, where they live and even their survival.

According to the report, 17 per cent of patients were admitted to an orthopaedic ward within four hours, an increase of 6 per cent since 2017.

And before being discharged, 70 per cent had a specialist falls assessment, up from 47 per cent.

Two out of every three patients were reviewed by a geriatrician while in hospital and 84 per cent received a bone health assessment to prevent further fractures.

The average length of stay was 12 days and one in five patients were discharged directly home from hospital.

Three per cent of patients suffered pressure sores but this was as high as 12 per cent in St James’s Hospital in Dublin.

Eight of the 16 hospitals that treat hip fractures shared a €278,000 bonus known as the best practice tariff last year for their improved performance.