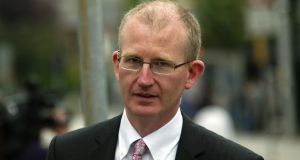 Dr Chris Fitzpatrick has stepped down from the board planning the relocation of the National Maternity Hospital. File photograph: Garrett White/Collins

Plans to relocate the National Maternity Hospital (NMH) to a religious-owned site at St Vincent’s University Hospital in Dublin have suffered a fresh blow, with the resignation of the doctor charged by the HSE with planning the €300 million project.

Former master of the Coombe Dr Chris Fitzpatrick stepped down from the project board yesterday in support of former NMH master Dr Peter Boylan’s stance against moving the hospital to a site owned by the Catholic Sisters of Charity.

Dr Fitzpatrick likened the controversy over the move to the row between the Catholic Church and then minister for health Noël Browne over the Mother and Child Scheme in the 1950s.

In an interview with The Irish Times, Dr Boylan claimed Mr Harris “let St Vincent’s dominate” in the negotiations with the NMH on the proposed relocation after his appointment as Minister last year. He contrasted the approach of Mr Harris with that of his predecessor Leo Varadkar. “When Leo Varadkar was minister he put a lot of pressure on St Vincent’s.

By announcing when he started the job that he wanted to make sure the relocation went ahead, Mr Harris had implied he wanted an agreement “at any cost”, Dr Boylan said.

Last night, the board of St Vincent’s Healthcare Group said it remained “totally supportive” of the project under the terms of the existing relocation agreement mediated by Kieran Mulvey last November.

The board said work could now begin on giving effect to legal agreements to underpin and secure the clinical and corporate governance structures outlined in Mr Mulvey’s document.

Minister for Health Simon Harris has indicated he will seek additional safeguards against religious interference in the relocated hospital when St Vincent’s and the NMH “tease out” the details of the agreement.

Dr Boylan resigned from the board of the maternity hospital yesterday, saying it was “blind to the consequences” of transferring ownership of the NMH to the religious-owned St Vincent’s and “deaf” to the concerns of the public.

He described the controversy as being “almost like an episode of Father Ted”.

The NMH responded by thanking Dr Boylan “for his many years of excellent service”, but said it was not accepting or engaging in any way with the “contentions” made in his resignation email.

In his resignation note, Dr Fitzpatrick said he shared Dr Boylan’s reservations about the proposed religious ownership and governance of the relocated maternity hospital.

“Accordingly, I have decided to resign from the project board,” he told HSE officials.

“What is happening has unfortunate resonances of Dr Noël Browne versus archbishop John Charles McQuaid and the Mother and Child Scheme controversy of the 1950s – and sadly we know how Irish women lost out on that opportunity,” he said.

Dr Fitzpatrick last week told the HSE the planned move was inappropriate and insensitive, and said the NMH should be given ownership of the site at St Vincent’s.

Dr Boylan said he had been “vilified” by his former employer. “The things that have been said about me in public about giving misleading statements and stating falsehoods have been personally hurtful and incorrect.”