Will best practice be possible given the Catholic ethos in force in the hospital? 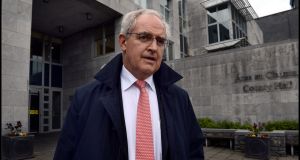 Dr Peter Boylan: concerns have been raised about the composition of the board of the new maternity hospital, which Dr Boylan has described as “a recipe for conflict”. Photograph: Brenda Fitzsimons

Picture the scenario, say a decade hence: a pregnant woman with diabetes is told by her doctors that giving birth may threaten her health, even her life. The woman is entitled to terminate her pregnancy under legislation, should her doctors decide this is necessary.

But where should this termination take place, if the woman is being treated for her diabetes in St Vincent’s hospital and is due to deliver her baby in the new national maternity hospital to be located there?

Best practice suggests the procedure should take place close to where adult medicine is being practised in St Vincent’s, in case something untoward happens. But will this be possible given the Catholic ethos in force in the hospital?

This is the kind of real-life scenario which can be teased out endlessly as part of the debate over moving the National Maternity Hospital (NMH) to St Vincent’s, where the site will be owned by the Sisters of Charity.

The ethos of the NMH will prevail in the relocated maternity hospital, both institutions insist, and all legally available services will be provided.

However, in St Vincent’s – accessible down a corridor – the ethos or ethical code of the Sisters of Charity will apply. In the interest of patients, services across both hospitals will be provided in a “seamless” manner, according to the agreement drawn up by mediator Kieran Mulvey, yet the ethical environment will differ on either end of the interconnecting corridor.

The agreement reached between the two hospitals last November, which was only published on Tuesday, provides some comfort on ethos issues but is couched in general terms.

The document, which is framed as a report to Minister for Health Simon Harris rather than a legal text, says services in the new hospital would be provided “without religious or ethnic or other distinction”. However, the addition of the qualifier “as much as possible” to this commitment has raised concerns.

The clinical governance structure that will apply when the hospital moves is illustrated in the document with a diagram, which appears to show the NMH master reporting to the board and chief executive of St Vincent’s.

In contrast, the diagram illustrating the corporate governance structure shows St Vincent’s and the NMH operating at equal level.

Concerns have also been raised about the composition of the board of the new hospital, which Dr Peter Boylan has described as “a recipe for conflict”. This will comprise four directors nominated by the NMH, four by St Vincent’s and an “independent international expert” in obstetrics and gynaecology.

This expert will be assessed by a selection committee chaired by a St Vincent’s representative, and containing one other representative from the two hospitals. Effectively, St Vincent’s will have a controlling majority for the selection of this person and could therefore deliver a majority on the hospital board.

A more detailed legal agreement will have to be drawn up before the NMH is relocated and this will have to address these concerns.