Peter Boylan: ‘I’ve been vilified by a lot of people’

Interview: Ex-master of Holles St says had obligation to speak out on transfer of NMH 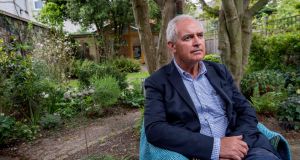 Peter Boylan: “It was untenable for me to remain on the board, when it is blind to the consequences of transferring 100 per cent ownership of the hospital to the Sisters of Charity, and deaf to the voices of the people.” Photograph: Brenda Fitzsimons

He hasn’t slept for a week but, sitting at home on Thursday in his open-plan kitchen, Dr Peter Boylan projects the same aura of calm and assurance that has filled the airwaves over the past, tumultuous weeks.

“It’s not good for the patient to see the doctor get panicky. You’re better to remain calm because you can put your point across more reasonably.”

It is just hours since he submitted his resignation from the board of the National Maternity Hospital, all but ending an association that stretches back to his training days in the mid-1970s.

The past fortnight, dominated by his battle within the NMH over its planned move to St Vincent’s Hospital, has taken its toll.

“It has been very stressful. The things that have been said about me in public about giving misleading statements and stating falsehoods have been personally hurtful and incorrect.

“I’ve been vilified by a lot of people from Holles Street but I don’t feel personal animus towards them. It’s upsetting but I’m big enough to deal with that. It’s not going to scar me.”

The former master of Holles Street draws on his rugby-playing days for a survival strategy. “You’d go out and play a match and tear strips off each other and when the whistle blows you shake hands. It’s not personal, it’s a debate and when it’s over, it’s over. You have to respect each other’s view but not get personal.”

Except that it has got personal. Boylan has been accused by NMH deputy chairman Nicholas Kearns of an “intimidatory tone” in his texts, prompting Kearns and the current master of Holles Street, Dr Rhona Mahony – Boylan’s sister-in-law – to call for his resignation.

Though enjoying wide public support for his stance, he doesn’t see himself as a whistleblower.

People needed to know these things and I still believe that, firmly

“All of this was in the public domain until Patsy McGarry (of The Irish Times) twigged it. I was going to wait until a meeting of governors to raise my objections from within the tent.

“Then I came back from holidays and the whole thing had erupted. I really had an obligation to put my view forward. I’d already put my views at several board meetings and didn’t get anywhere. People needed to know these things and I still believe that, firmly.”

His resignation was not forced, he says. He had decided to go “at a point of my choosing”. But why now?

“It was untenable for me to remain on the board, when it is blind to the consequences of transferring 100 per cent ownership of the hospital to the Sisters of Charity, and deaf to the voices of the people.” Leaving the board now will give him more freedom to speak out, he believes.

He disputes his depiction as a “lone voice” speaking out on behalf of women. “There are plenty of people who have reservations. I know within the hospital there are a lot of people who are very uneasy and who have told me they admire what I’m doing and agree with me.”

So why don’t others come out publicly in support of his concerns? “It would be very difficult for them. I don’t think the reception for them speaking out would be very pleasant. I think they would be given out to and accused of being disloyal.”

He delivered over 6,000 babies in his decades at Holles Street until his retirement last year. In his early days, he says, he was “quite conservative” and the debate about abortion that led to the 1983 pro-life referendum was “peripheral” to daily work in the hospital.

“That’s one of the interesting things about doctors. They work so hard they don’t have time to get involved or to think even about a lot of the issues that are at the heart of this matter here. They have to take on faith what they’re told.

“I can understand that, but it’s very naive to believe this will be the only hospital in the world to be owned by a religious order that will allow these procedures to go on. It beggars belief they believe that.”

While training in London his views began to change. A Jewish doctor friend was involved in terminations for foetal abnormality. “We had a lot of interesting discussions. The conclusion I came to was that these people were civilised, highly educated, thoughtful and caring. Just because they had grown up with different religious beliefs or values, they weren’t bad people.

“I think that’s true of societies that have sorted out the problem of abortion. We don’t believe France or Scandinavia are abnormal or evil societies, yet there is an attitude in this country that what they are doing is morally wrong.”

He was master of Holles Street in the 1980s when the hospital started performing tubal ligations or sterilisations. He was called up to Archbishop Desmond Connell’s palace in Drumcondra.

“We sat down across the table and he told me we shouldn’t be doing these operations. I said, ‘I’m sorry, but they are medically indicated, we are going to do them.’ It was a very direct attempt at interference by a Catholic archbishop.”

No GP would send a woman for an elective tubal ligation to St Vincent’s, period

Times were changing; Mary Robinson was elected president and became patron of the hospital. “She had the effect of liberalising a lot of attitudes. I felt we were in a very strong position, so we just pushed ahead and did them.”

The difference between this situation and the current debate, he says, is that the Church “doesn’t own the [maternity] hospital, they don’t own the company that runs the hospital and they don’t have a disproportionate representation on the board”.

Much of the debate over the past week has centred on what might happen if the NMH moves to a religious-owned site at St Vincent’s, but what is the current situation?

“If I was in St Vincent’s and a GP wrote to me saying Mrs Murphy has four children, she’s 36 and doesn’t want any more children, I’d see her, but I’d see her in Holles St and do the procedure there.”

If you’re offered an injection of €300 million, for no effort, you’ll take it

Doctors don’t challenge this status quo because “they don’t want to cause hassle, and it wouldn’t be fair to the patient”.

Any attempt by the State to compulsorily acquire the site would end up in the courts for years, he believes. “A more elegant solution would be for the sisters to say they understand the public outrage and are willing to allow the land to be owned by the State. This would allow for the construction of a different board structure, as well as being a fine gesture to the women of Ireland.”

The nuns wish to retain ownership of “the whole shebang”, probably for financial reasons. “If you’re offered an injection of €300 million onto your balance sheet, for no effort, you’ll take it.”

I ask how are relations with Rhona Mahony, given their diametrically opposed stances on the issue. Rhona is the younger sister of his wife, Jane.

“Well, what do you think they’re like?” he laughs.

He says he was amazed at the outcome of the citizens’ assembly last weekend: “I didn’t think they would come up with such a liberal proposition.”

“People’s beliefs need to be respected and if people don’t want to get involved, then don’t. But don’t impose your views on the rest of the population. That unfortunately is what’s happening and has happened for too long in this country.”