Motion not universally passed at board meeting; Some members express concern at ownership

Health Minister Simon Harris TD has called for a 'period of calm and cool heads' in relation to the debate over the new National Maternity Hospital and stated his determination to build it on the lands at St Vincent's Hospital. Video: Bryan O'Brien 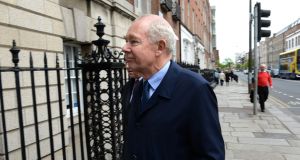 The National Maternity Hospital (NMH) reaffirmed its commitment to moving to the St Vincent’s Hospital campus at a board meeting on Wednesday evening.

In a statement, the board of the hospital said it welcomed Tuesday’s statement from St Vincent’s in which the south Dublin hospital said the new national maternity hospital would carry out any medical procedure that was legal.

The NMH board said it had “re-endorsed its commitment to the agreement mediated by Kieran Mulvey in November last”.

This agreement ensured that the clinical, financial and operational independence of the new national maternity hospital “shall be enshrined in its memorandum and articles of association and all related legal agreements”.

The statement was read outside to awaiting media by the deputy chairman of the board Nicholas Kearns, flanked by master of the NMH Dr Rhona Mahony.

The motion was not universally passed at the board meeting, however, and some members expressed concern that the issue of ownership of the new hospital had yet to be resolved.

However the Lord Mayor of Dublin Cllr Brendan Carr accused the other members of the board of having a “complete disregard” for the concerns raised by the public about ownership of the hospital.

He said he was “very disappointed” by the statement which endorsed the deal entered into with St Vincent’s last November and which made no mention of the ownership of the hospital.

“There didn’t seem to be any attempt by the majority of the members of the board to address the serious concerns about the public money being put into the development,” he said.

Mr Carr said it was now up to Minister for Health Simon Harris to intervene and compulsory purchase the land on the St Vincent’s site.

“He is the only person who can step into this and put the public’s mind at rest by CPOing the land that this hospital is built on and ensure we give a proper service to the women of this country.”

Mr Carr said members had expressed a fear that if any attempt was made to compulsory purchase the land that St Vincent’s would refuse to cooperate. “I don’t believe that to be true,” he added.

“The people of every county are paying for this. They deserve a decent hospital and it is not fair that €300 million of public money is being given to a private organisation.”

Mr Carr said only a few board members raised the issue of public concern about ownership of the new maternity hospital, but the “vast majority” went along with the original statement fearing otherwise that “the rug would be pulled from under them”.

Sinn Féin Cllr Michéal Mac Donncha said he did not support the statement issued by the board of the National Maternity Hospital board either.

He also called on the Minister to meet the full board of St Vincent’s. “The issue of ownership has to be addressed. It is of huge public concern,” he said.

Mr Mac Donncha maintained the clinical independence of the hospital cannot be fully resolved without the issue of ownership also being addressed.

“We have to try and ensure that the agreement that is there has to be adhered to to the letter,” he added.

Earlier Mr Harris said that the State will be able to block the Sisters of Charity from ever selling off the proposed new National Maternity Hospital (NMH).

Mr Harris also said a legal contract between St Vincent’s Hospital and the State still needed to be written up and agreed to.

Speaking before Wednesday’s Cabinet meeting, he said he has ensured a “lien” will be placed on the planned new maternity hospital. This would effectively be a stop on the Sisters of Charity ever mortgaging or selling the hospital site to another buyer without the state’s approval.

“I heard very clearly from the people of this country that they do not want a hospital via which a private entity be it religious or otherwise would profit… The fact is that this property would not be able to be used to mortgage or borrow by any entity. The taxpayers interest will be fully protected 110 per cent, that wasn’t always the case in previous years” Mr Harris said.

While concerns over religious interference in the planned new maternity hospital had eased following a commitment from the St Vincent’s Healthcare Group to respect the new hospital’s clinical independence, further questions on the state handing over full ownership of the hospital to the company would be clarified in time, Mr Harris said.

“The agreement reached between the two hospitals endeavoured to address issues, in terms of clinical independence, in terms of ownership … What I want to say to people today is these are issues that we will tease through,” Mr Harris said.

Minister of State at the Department of Health, Finian McGrath, said concerns over the hospital’s ownership should be put aside. “We need to build this hospital” Mr McGrath continued.

“Of course there are issues on the long term issue of the separation of Church and State, which I personally support. We need a broader debate about long term control, but that can be done … we need to get on.”

The final board director is to be an independent expert in obstetrics and gynaecology. The selection process for appointing the independent director will be decided by a three person committee of the St Vincent’s chief executive officer, the St Vincent’s clinical director, and one representative from the NMH.

The two to one imbalance in choosing the ninth director of the board appears to give the St Vincent’s group “the ultimate say over the selection,” Ms Shortall claimed.