Doctor resigns from board of NMH, saying it is ‘blind to consequences’ of St Vincent’s move 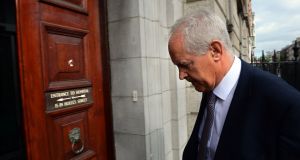 Dr Peter Boylan arrives for a meeting of the executive board of the National Maternity Hospital (NMH) at Holles Street in Dublin on Wednesday evening. Photograph: Dara Mac Dónaill/ The Irish Times.

Dr Peter Boylan has resigned from the executive board of the National Maternity Hospital (NMH), saying it is “blind to the consequences” of transferring ownership of the hospital to the religous-owned St Vincent’s Healthcare Group.

Dr Boylan, a former master of the NMH, announced his decision on Thursday following a meeting of the executive board on Wednesday night over the proposed move to a site on St Vincent’s Elm Park campus, which is owned by the Sisters of Charity.

“I can’t remain a member of a board which is so blind to the consequences of its decision to transfer sole ownership of the hospital to the religious Sisters of Charity and so deaf to the concerns of the public which it serves,” he told the Pat Kenny Show on Newstalk.

He later told RTÉ that the controversy over the selection of a site for the new hospital had become “almost like an episode of Father Ted”.

The executive board’s deputy chairman, former High Court president Nicholas Kearns, had previously asked Dr Boylan to resign from the board after the medic criticised the move from Holles Street.

Dr Boylan had concerns over involvement of the Sisters of Charity, arguing that the Catholic ethos of St Vincent’s would interfere with the independent operation of a maternity hospital.

He said he may have been a lone voice on the board in opposing the move but this was not the case in the community outside, particularly women, to which he said “we have a great responsibility”.

He said the proposed structure of the board of the new hospital was “‘designed for conflict.”

He said the devil of the deal was going to be in the detail and that he hoped “the public debate will persuade them that it’s a very fragile deal, flawed and inevitably will cause huge conflict in the running of the hospital”.

On Wednesday night, following the board meeting, the hospital publicly reaffirmed its commitment to moving to the St Vincent’s campus. Only three of the more than 20 in attendance at the meeting voted against the proposal.

In its statement, the board said it welcomed St Vincent’s saying the new NMH would carry out any legal medical procedure.

The NMH board said the agreement between it and St Vincent’s, mediated in November by Kieran Mulvey, ensured that the clinical, financial and operational independence of the new national maternity hospital “shall be enshrined in its memorandum and articles of association and all related legal agreements”.

Labour leader Brendan Howlin said the Sisters of Charity should “hand over” the land for the new national maternity hospital, which would do away with any doubt about ownership.

He told RTÉ’s Today with Seán O’Rourke he was disappointed to hear of Dr Boylan’s resignation and expressed concern at allegations of an atmosphere of intimidation and bullying at last night’s board meeting, as claimed by the Lord Mayor of Dublin Cllr Brendan Carr.

Mr Carr criticised the circulation of a letter at the beginning of the meeting, which called for the agreement to go ahead and was signed by staff at the hospital. He suggested staff might have been pressured into signing it.

Cllr Claire Byrne (Green Party) acknowledged on the same programme that the atmosphere at the meeting had been “terse” but said she supported the board’s decision.

Another board member, Sinn Féin councillor Micheál Mac Donncha, said that “from day one” the aim of the St Vincent’s Healthcare Group had been to have “total control” of the hospital.

The National Maternity Hospital said it had written to Dr Boylan to thank him following his resignation.

It stated that “without accepting or engaging in any way with the contentions” he had made in his resignation email, the hospital wished to thank him for the “many years of excellent professional care and service” provided.

“I am also saddened that your association with the hospital has ended and wish you every success for the future,” the letter said.

While he has resigned from the executive board, Dr Boylan will remain on the NMH’s board of governors.