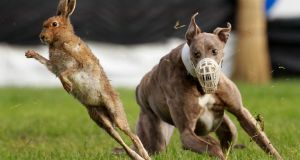 The Minister for Heritage, Darragh O’Brien, has called for the hares, a protected species, to be released on animal welfare grounds. Photograph: William Cherry/Presseye

The Irish Coursing Club (ICC) has been ordered by the Government to release all hares it has captured for coursing meetings that will not now take place because of Covid-19 restrictions.

The numbers of hares involved are unknown, but many clubs captured hares for coursing meetings that began before the Level 5 restrictions were introduced.

With another five weeks of lockdown to go, however, the Minister for Heritage, Darragh O’Brien, called for the hares, a protected species, to be released on animal welfare grounds.

Mr O’Brien, who has responsibility for conservation, issued licences to the Irish Coursing Club in September for clubs to net and tag hares for the 2020/2021 season, on condition that all Covid-19 rules were obeyed.

Licences allow coursing clubs to catch and net hares for coursing meets in which greyhounds are all muzzled and the hares must be released afterwards. The coursing season – and the licences – runs until the end of February.

The Department of Heritage wrote to the ICC on October 20th, and again on October 23rd, about “coursing activities and the coursing licences to net and tag hares in the context of the Covid-19 public health emergency”.

Days later, the department told the chief executive of the ICC, DJ Histon, that “it seems clear” that coursing will not restart “ until at least December 1st.

“It is not clear at what point after that date it may be possible for coursing to resume,” an official told the ICC executive, adding that clubs will have captured hares for meetings that are now off.

“Clearly wild hares which are a protected species are better off in the wild rather than being held in captivity in groups in confined enclosures.

“Accordingly, given that by 1 December hares will have been held in captivity for at least six weeks from the date of introduction of Level 5 restrictions, in many cases hares will already have been held in captivity for a number of weeks prior to the introduction of Level 5, and it is not clear at what point after 1 December it may be possible for coursing to recommence.”

The letter concluded that “in terms of animal welfare and the conservation of this protected species” the Minister requested that “coursing clubs would release captured hares back into the wild as soon as possible”.