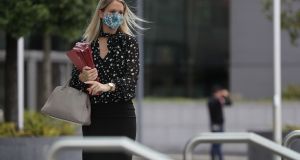 Minister for Justice Helen McEntee: ‘Significant funding has been allocated in Budget 2021 to try to move away from a paper-based system to an online one.’ Photograph The Irish Times

Minister for Justice Helen McEntee has pledged to implement faster processing of applications from undocumented migrants that have been delayed for years in the system partly because of the department’s reliance on paper-based administration.

Applicants include children born in Ireland after the 2004 citizenship referendum who have grown up in the State, are close to school-leaving age and will be required to obtain a work permit in order to seek employment.

Ms McEntee pledged to follow through on the programme for government commitment that within 18 months it would create “new pathways for long-term undocumented people and their dependants who meet specified criteria to regularise their status”.

The Minister also acknowledged that the immigration section of the department is “very much behind” other Government departments which have moved online to deal with issues such as applications.

She praised the Department of Foreign Affairs for its “award-winning online system for passport applications”. She said: “This is where we want to be.”

Ms McEntee said significant funding has been allocated in Budget 2021 to try to move away from a paper-based system to an online one.

“That will be a significant help, even just with regard to the time that it takes to process all these applications,” said the Minister.

When the issue was raised in the Dáil during justice questions Independent TD Michael McNamara said there was a “huge amount of administration” in dealing with people who have been in Ireland “for such a long time that they are almost inevitably going to be able to stay”.

It would be for the benefit of the department and broader administration as well as for those applying for citizenship and people who are undocumented that such cases be dealt with.

Ms McEntee agreed that “when there is a lot of paperwork, documents are sometimes unintentionally mislaid”. She hoped the investment in technology and move online would “hopefully, take away some of those concerns”.

Solidarity TD Mick Barry had raised the difficulty of thousands of young adults born in Ireland or had been resident in the State long-term as residents but have no national status.

“The Tánaiste wrote to me to clarify that these people would have to apply for a work permit in the country in which they were born and have grown up.”

Mr Barry said an estimated 15,000 to 17,000 undocumented people are living and contributing to Irish society. She said that with the huge delays in dealing with applications the Minister should grant papers “en masse” to them.

Ms McEntee said that no EU member state grants such automatic and unconditional citizenship. “This is not something on which we are an outlier.”

She said that since the citizenship referendum a person born on the island of Ireland is not entitled to be an Irish citizen unless that person’s parents have been resident for three of the four years preceding that person’s birth.

It is open to people to apply for citizenship after five years and “if somebody has been here for 10 or 12 years, that option is open to them and I encourage anyone in that position to do so”, she said.