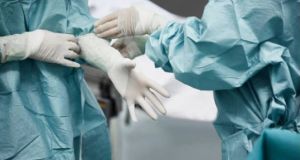 Senior Government sources confirmed that beds in hospitals in the Republic may be needed to facilitate any further increase in coronavirus cases in the North. File photograph: Getty

Irish hospitals may have to cancel certain non-Covid-19 healthcare services to facilitate critical care cases from Northern Ireland, it has emerged.

Senior Government sources confirmed that beds in hospitals in the Republic may be needed to facilitate any further increase in coronavirus cases in the North and that this could mean the cancellation or deferring of non-Covid healthcare in order to do so.

In the North’s hospitals, 317 people with coronavirus are receiving treatment, with 37 in intensive care.

The Department of Health in the North said on Sunday there was “no immediate or anticipated need” for coronavirus patients from Northern Ireland to receive intensive care treatment in the Republic.

However, a spokesman for the department said that “should either jurisdiction require support this will be provided where possible”, noting that there was “longstanding co-operation between respective authorities and health services in Northern Ireland and in the Republic of Ireland.”

There were 15 intensive care beds available in the North’s hospitals on Sunday. However, this does not include the additional capacity, understood to be about 150 extra ICU beds, which can be made available at the temporary critical care “Nightingale” hospitals.

Government sources in Dublin have also indicated that while a review of the Covid-19 situation in mid-November could result in the 5km travel restriction imposed under current Level 5 measures being expanded to 10km, it is more likely the current full set of restrictions would remain in place for six weeks as planned with the aim of putting the whole country at Level 2 in December.

At Level 2 the majority of areas of the economy and society would be open.

A number of key indicators for the spread of Covid-19 have improved in recent days, latest data shows.

The proportion of people testing positive, along with the number of close contacts per person – both important indicators of the rate of transmission of the virus in the community – have fallen.

HSE chief executive Paul Reid on Sunday noted a fall in the positivity rate for tests, which on Saturday stood at 6.2 per cent for the previous seven days.

Mr Reid also highlighted a drop in the number of close contacts, down from an average of 4.5 to three for each case. The rate of community transmission has remained constant, at 28 per cent, since the start of the month.

Officials caution against reading too much into single-day figures, but the improvements seen across a range of indicators point to some stabilisation of the situation.

A further 1,025 confirmed cases of Covid-19 were reported by the National Public Health Emergency Team on Sunday. This brings to 57,128 the total number of cases of the disease in the Republic.

In the North, the deaths of 14 people with Covid-19 were recorded over the weekend and a further 896 cases of the virus were reported on Sunday and 923 on Saturday.

Tánaiste Leo Varadkar said on Sunday that the Government was becoming increasingly optimistic about the availability of a vaccine potentially in the first quarter of 2021.

President Michael D Higgins on Sunday signed into law legislation that allows for on-the-spot fines for non-compliance with public health guidelines during the Covid-19 pandemic.

Separately, the governments of Italy and Spain, the European countries hardest hit by the first wave of the coronavirus pandemic, announced sweeping measures on Sunday to combat a surge in the number of new cases.

Spain has announced a nationwide curfew and triggered emergency powers after the country’s infection rate jumped by almost a third over the past week.