Drug combination could extend life expectancy by up to 18 months 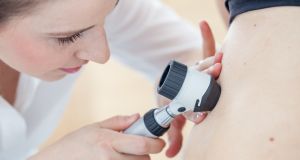 Metastatic melanoma, where the cancer has spread within the body, is one of the most serious types of skin cancer. Photograph: iStock

More than 500 Irish patients with advanced skin cancer have been given access to a new treatment that may extend their life expectancy by up to 17 months compared with existing treatments.

The Health Service Executive has approved reimbursement for encorafenib in combination with binimetinib for the treatment of adults with unresectable or metastatic melanoma with a mutation known as BRAF V600.

The decision was communicated to doctors last May but was made public through a notice on the HSE website only this week.

Just over 1,000 patients in Ireland have melanoma, of whom about half have the BRAF mutation. More than 97 per cent of BRAF mutations are in the BRAF V600 gene.

Metastatic melanoma, where the cancer has spread within the body, is one of the most serious types of skin cancer, and accounts for most skin cancer deaths in Ireland.

The five-year survival rate for patients with stage IV form of the cancer is under 20 per cent, compared with over 50 per cent if the disease is diagnosed at stage III.

As with other targeted therapies, the new treatment works by shrinking cancer cells and tumours by blocking the activity of molecules within the cells that cause cancer to grow and spread. The combination of drugs works more effectively than a single treatment while producing less serious side effects.

The manufacturer, Pierre Fabre, says an oral combination of the two drugs has been shown to increase medial progression-free survival – the length of time without the disease progressing – by more than seven months relative to existing treatments.

The combination has been shown to increase overall survival by 17 months versus existing treatments, it says.