Cork haven a sanctuary for 350 people of a certain vintage

Ageing Ireland: A unique community development that could form a valuable blueprint 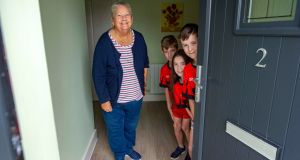 Ballingeary – or Béal Átha an Ghaorthaidh – is a village of about 350 people in mid-Cork that is best known for its proximity to Gougane Barra, or as one of the three towns making up the Muscraí Gaeltacht.

Heading west from Macroom, you might not even notice the modest, yellow painted building, surrounded by smaller bungalows, that has become the village’s only slightly less well-known claim to fame.

It is called Cuan Barra. And it is decidedly not a retirement village.

“Nobody ever calls it that, We’d never use the age thing as a way to describe it,” says Sean Kelleher, chairman of the non-profit Coiste Tithe Uibh Laoire Teo organisation, which runs Cuan Barra. “We think of it as supporting the community; not as supporting the young or the old.”

There’s no easy shorthand for this unique community development, which combines independent, fully-furnished housing for older residents with a childcare centre; a meal service that serves up 2,500 hot meals a year to people in the parish; a public playground; a music venue; a pop-up hair salon; a yoga studio; a beauty salon; a miniature lending library; a GP surgery and a free bus service.

Originally, Cuan Barra was only supposed to offer somewhere for the village’s older residents to live. “Ballingeary people want to live in Ballingeary,” says Kelleher, who has just returned from his rounds delivering post. “But there wasn’t any housing here for older people.”

So Kelleher and others in the village put together a committee, raised the money to supplement funds advanced by Cork County Council under the Capital Assistance Scheme, the Health Service Executive and the parish and – in 2002 – started to build.

“We were halfway through developing the houses and someone suggested that maybe we should have a daycare centre as well. And we kind of said, ‘what would we want it for?’ We had the village hall already. But anyway, to make a long story short, we went ahead. And it was the best thing we ever did.”

The development happened organically from there. “It was kind of an accident,” he says. But now he thinks every village in Ireland could have its own Cuan Barra.

Today, eight residents live in the six modern, bright two-bed bungalows surrounding the centre. The main building includes a daycare centre, which provides preschool and afterschool care, and a large hall with sliding partition walls, making the space easily adaptable to the needs of the village.

Bridie Dillon lives in one of the three new houses at Cuan Barra. She proudly gives a tour of the two-bedroom house, with its wide halls, marble bathroom, tasteful grey kitchen and modern floral fabrics. There’s a panic button in the hall and residents wear a pendant that is connected to a central monitoring system, but otherwise it is like any compact, well-designed house.

She moved in last May when health problems meant she wanted to be nearer to her daughter, who lives in Ballingeary. “I’m a blow-in from over the border in Kerry,” she says.

“There was one strict rule when she moved in,” says Kelleher. “No Kerry flags.”

Cuan Barra is “very peaceful. It’s very relaxing here”, says Dillon. “The community centre is brilliant if you want to meet people or have a meal. Anytime you get a meal cooked for you, it’s grand. And we have the hairdresser and the chiropodist.”

Hearing the children in the playground on the other side of her garden wall “is great craic”, she says. As she talks, Bridie’s daughter and three of her grandchildren – Clíodhna, Aron and Rúadhan Ó Tuama – pop in for a visit. They’ve just come back from their holidays in Galway and brought their granny a sign saying “Cork Parking Only. All Others Cars Will Be Towed.”

Back in the centre, Caitríona Ní Chéilleachair, who is a primary school teacher and secretary of the committee, shows me the schedule. It’s expanding all the time, she says. “There’s pilates, yoga, bingo, art on a Thursday night. We’ve a bus that collects people around the area and brings them in.” And she says, turning to Kelleher, who is her father, “I think it was you had the brainwave about the hairdresser.”

A few years ago, he says, the only hairdresser in the village emigrated. Kelleher was doing his rounds as postman and people kept saying to him it was a shame about the hairdresser. “I am in an awful position as the postman because whenever I meet someone they’ll say to me, ‘do you know what would be kind of handy?’ ”

He can’t help fixing things. “I came back and said, ‘could we have a hairdresser in here as well?’ ” So a sink, salon chair and some presses were added to the front room.

“And now we’ve a doctor coming as well and a chiropodist. None of that would be in the village if we didn’t have them here.”

For the older residents of Cuan Barra, the development “allows them to be in their own houses for as long as possible”, he says. And the constant activity means they can live independently, without ever being lonely or treated as separate from the rest of their community. Ní Chéilleachair loves the idea that everyone in the community uses the space.

On any given afternoon during term time, there will be about 20 children in afterschool, plus more dropping in for a couple of hours between class ending and the schoolbus picking them up from the primary school. “One of the ladies here said it’s lovely just to hear the children playing in the playground. It’s things like that we wouldn’t have thought of,” says Kelleher.

It also has the benefit of helping to keep the language alive. “Half the parish wouldn’t be in the Gaeltacht and half would,” says Kelleher. But at meal times, all the conversation is bilingual.

Dillon grew up in the north, so didn’t have the chance to learn Irish before she moved to Ballingeary. She’s working on it now. “Slán, really, is the main word I’d use so far,” she laughs.

For the rest of the population, having Cuan Barra means people in the village don’t have to travel half an hour each way to Bantry, Dunmanway or Killarney for services like a GP or hair salon. “The biggest problem we’d have is that we’d have a pile of things all on the same night. You could have two meetings, music on in the big room, someone using the kitchen, someone else in here,” says Kelleher.

“You’d have people standing in the corridor some nights nearly,” says Ní Chéilleachair. “It’s been fantastic for the village. There would be no one in Ballingeary who hasn’t been here at some stage or other.”