Measles on the rise: What you need to know about the disease

Before the emergence of vaccines in the 1960s, measles killed 2.6m people a year 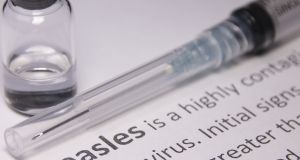 Measles can be transmitted by an infected person at any stage from four days prior to the onset of the rash, to four days after it appears. Photograph: iStock

Before the emergence of vaccines in the early 1960s, measles killed about 2.6 million people a year with major epidemics striking every two to three years.

That may have all changed but the disease is still a major killer of young children.

The vaccine, now in use for over half a century, is considered safe, effective and inexpensive by the medical community.

Irish people are protected with two doses of the MMR (Measles-Mumps-Rubella) vaccine.

For those who do contract the disease, its initial symptoms include a high fever, beginning about 10 to 12 days after exposure to the virus.

This can last for up to a week while the initial stage of illness can include the onset of a runny nose, a cough, red and watery eyes, and small white spots inside the cheeks.

After several days, a rash appears, usually on the face and upper neck area. For the next three days this rash spreads until it eventually reaches the hands and feet. The rash lasts for about six days before fading.

However, most measles-related deaths are caused by complications associated with the disease, and are more common in those under the age of five and adults over the age of 30.

The most serious complications include blindness, encephalitis (an infection that causes brain swelling), severe diarrhoea and related dehydration, ear infections, or severe respiratory infections such as pneumonia.

Serious complications and death are far more common in countries with higher rates of malnutrition.

The virus is spread by coughing and sneezing, close personal contact or direct contact with infected nasal or throat secretions. It remains active and contagious in the air or on infected surfaces for up to two hours.

It is also not necessarily that obvious - measles can be transmitted by an infected person at any stage from four days prior to the onset of the rash, to four days after it appears.