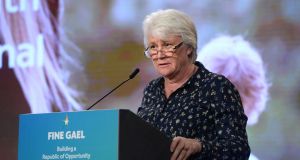 New voluntary codes of practice restricting the advertising and marketing of food and non-alcoholic drinks have been announced.

They apply to “non-broadcast advertising” of high fat, sugar, salt (HFSS) foods, such as snack foods, fizzy drinks and confectionary.

The initiative is in response to obesity levels in Ireland, where three out of five adults and one in four children are overweight or obese. The absence of mandatory elements in the codes, however, has been strongly criticised by the Irish Heart Foundation.

The codes, which were published by Minister of State for Health Promotion Catherine Byrne on Wednesday, include an agreement on reduction in advertising, marketing and sponsorship of HFSS food and drinks in a variety of settings including out of home, print media, cinemas and the education sector.

For example, HFSS foods will only be marketed in consumer publications where the adult readership is 75 per cent or greater. The codes also include restrictions on “takeovers” of locations, and “wraparounds”, which take up 100 per cent of advertising space, such as on a tram or bus.

Most of the digital rules relate to limits on targeting of children under 15 years. And Retail Ireland has agreed to increase its promotion of healthier options.

Ms Byrne said the codes “seek to ensure children are not exposed to inappropriate marketing, advertising or sponsorship associated with these kinds of food and drink products, and that healthier food choices are actively promoted”.

Her department’s healthy eating guidelines and food pyramid indicate such foods and drinks should only be consumed a maximum of once or twice a week, she said. Yet “the current food environment does not adequately support this message”.

On that basis the food industry needed to “cop-on”, she added. “This needs to change and the codes will help support that change.”

The codes will complement Broadcasting Authority of Ireland regulations on restricting broadcast advertising of HFSS foods to children.

Prof Alan Reilly, former head of the Food Safety Authority of Ireland, who chaired the stakeholder group which has agreed the codes, said Ireland has a first-ever agreement in relation to food and non-alcoholic advertising, marketing and sponsorship in non-broadcast media including digital media. The group was made up of Government departments, health agencies, advertising bodies, retailers and representatives of the food and drink sectors.

The IHF said State-funded research estimates that 85,000 of today’s children on the island of Ireland will die prematurely due to overweight and obesity.

Janis Morrissey, head of health promotion at the organisation said this demonstrated an overwhelming need to alter our current course away from “what may become the most fatal failure of political will, and of our children, in the history of the State”.

“Not only is this new voluntary code doomed to failure, it is likely to do more harm than good by delaying real progress in limiting children’s exposure to junk food marketing,” she said.

Food Drink Ireland, which represents the food and drink sector, welcomed the new codes. Its director Paul Kelly said food and beverage companies are committed to responsible marketing and supporting the implementation of related recommendations on tackling obesity.

But assistant professor of marketing at Trinity Business School, Norah Campbell said there is “no evidence that a voluntary code has ever worked to reduce junk food marketing to a population”.

“In fact, it has a boomerang effect: allowing junk food companies to innovate in its targeting while deferring the necessary statutory regulation that will be inevitable.”

The Government had put itself in the dubious situation of assuming the ultimate moral responsibility for their effectiveness, Dr Campbell said.