‘I don’t know if it is hysteria but it does seem crazy,’ says pharmacist as demand spikes 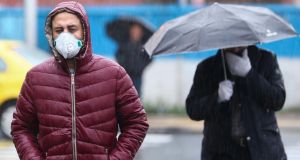 Panic-buying of face masks in pharmacies and hardware shops has led to empty shelves across the country, while wholesale prices have soared as much as 500 per cent.

Pharmacies have also reported that alcohol-based hand gels are in short supply and the demand for thermometers has spiked as fears mount about the spread of the coronavirus across the world.

“Demand for surgical masks has gone up by so much in recent days that I don’t have any in stock and can’t source any at a reasonable price,” said Noreen Fitzgerald of Fitzmedical in Dublin.

She said she was able to buy a pack of surgical masks wholesale for €3 in early January but suppliers who had stock were looking for €15-€20 this week.

“I have had so many people coming through the door over the last couple of weeks,” she said. “It is on a different level altogether. Normally my market would be made up of more than 90 per cent GPs, but it is the general public who have been buying the masks.

“I don’t know if it is hysteria but it does seem crazy,” she added. “I have been talking to doctors this week and I don’t know how some medical centres are going to cope if the virus does come here.”

Ms Fitzgerald said that as fears over the spread of the coronavirus in China grew in January, much of her business was from the Asian community in Ireland, who were buying masks to send to their families in China.

“In the last few days I have had more Irish people coming in looking for masks for elderly parents or for people who are immune-compromised,” she said.

Demand for alcohol-based hand gels has also taken off in recent days although not yet to the same extent as face masks.

“The sale of gels has gone through the roof but I took a large delivery this week. I don’t know how it will last,” Ms Fitzgerald said.

Shortages and a complete lack of supply were also being reported at pharmacies and medical equipment suppliers.

Staff at Murrays Medical Equipment on Talbot Street, Dublin, said they had sold the last of their face masks more than a week ago and were unable to say when a new supply would arrive. There were a few bottles of alcohol-based hand sanatisers for sale but they were selling fast.

Further up the same street, in Active Life, there had been a run on face masks too, and staff did not know if or when new supplies would arrive.

“We have been getting the masks in sporadically and may have some later in the week,” one said.

In one Boots outlet in the north inner city, staff said they had been promised a delivery of face masks but it had not materialised, and the shop had also sold out of its supply of hand sanitisers.

“We were told that at the very least we would have face masks for the staff but there is still no sign,” one employee said.

In Hickeys on Henry Street there were no thermometers, face masks or hand gels and none were expected in.A branch on O’Connell Street received a small supply of surgical masks on Tuesday afternoon but had completely sold out of the hand sanitisers.

It was much the same elsewhere. McGoey’s in Dunleer, Co Louth, ordered 500 masks three weeks ago but they quickly sold out. It no longer has any in stock and “can’t get them anywhere”.

There were masks selling on online classifieds sites, with some selling for as much as €3 each.