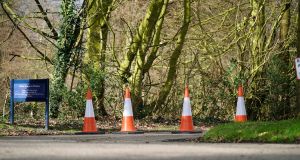 Traffic cones block the entrance to Cransley School in Northwich, Cheshire, England, which is closed for the rest of the week for a ‘deep clean’ after pupils and teachers came back from the Lombardy region. Photograph: Christopher Furlong/Getty Images

A number of teachers and pupils from schools in Northern Ireland have been sent home to self-quarantine after they were on recent school trips in northern Italy.

In the Republic, students from three schools in Waterford are being monitored for the coronavirus, following trips to Italy.

Two of the schools, De La Salle College and St Paul’s Community College, both based in Waterford city, are considered to be “low risk” as their trips took place some distance away from the affected area in Italy.

The HSE has arranged for screenings to take place in the schools.

“The students and teachers were met today and all are healthy and not presenting with any symptoms of the Coronavirus, ” she said in a statement.

“We have contacted the HSE and have been informed that the group from St Paul’s Community College were skiing in an area of zero to low risk. We are following the instructions of the HSE and will keep our school community updated of any developments if the need arises.”

A secondary school in Bray, Co Wicklow has postponed a parent teacher meeting due to take place on Tuesday, due to coronavirus fears after students in the school returned from a ski trip in Italy in recent days.

Second year students from Presentation College boys secondary school returned from a skiing trip last Friday. The school said in a statement it was moving the planned parent teacher meeting for second years to a later date “as a precautionary measure”.

Mount Anville, a south Dublin girls fee-paying school, also had a group of students and teachers travel to northern Italy on a ski trip over the midterm break.

In a message to parents the school said precautions were being put in place, such as hand sanitisers being placed around the school.

“Parents of students with compromised immune systems/underlying illnesses may consider it prudent to keep their daughters at home until we receive further advice from the health authorities,” the notice said. “We ask that any student who is unwell should remain at home,” it said.

Outlining advice to schools in Northern Ireland, Dr Muhammad Sartaj, consultant in health protection at the North’s Public Health Agency (PHA) said “anyone who has been in northern Italy (not including Pisa, Florence or Rimini) is asked to stay at home for 14 days if they develop cough, fever, or difficulty breathing and seek medical advice”.

“The guidelines apply equally to all travellers to areas covered, whether travel has been for a holiday, school trip, business, or other reason,” he said.

Elma Lutton, principal of Cambridge House Grammar School confirmed on Tuesday afternoon that about 50 pupils and six teachers were sent home to self-quarantine for two weeks after they were on a school ski trip in northern Italy.

Ms Lutton stressed that it was a”precautionary” action, based on advice from the Education Authority and the PHA.

“Pupils were not in any of the designated quarantined towns in Italy but they were in the Lombardy region and did travel through Milan Airport, ” she said.

“No symptoms of the virus have been reported by any member of staff or pupil who travelled on that trip. We will just continue to follow the advice from the relevant authorities,” she added.

A spokeswoman for Limavady Grammar School said a group of their pupils who recently returned northern Italy and also had travelled through Milan Airport.

Following the advice of the PHA “all pupils and staff who travelled from Italy have been advised to self-isolate for 14 days until March 9th as a precautionary measure,” she said.

A group of 88 pupils and staff from Banbridge Academy recently were on a ski trip in the resort of San Valentino. In a statement school principal Robin McLoughlin said it too was following the PHA advice.

The Ulster Unionist Party health minister Robin Swann said updated guidelines were being issued to doctors: “We are in a fast-moving situation…It is unlikely at this stage that any school would have to close if they follow the latest guidelines,” he said on Tuesday.

A number of schools in Britain have also sent home students who were on ski trips to Italy. Cransley School in Northwich, Cheshire, England has been closed for the rest of the week for a “deep clean” after pupils and teachers came back from the Lombardy region.

The Irish Travel Agents Association (ITAA) has told holidaymakers to follow the latest DFA advice when planning to travel overseas.

John Spollen, ITAA president, said it was a “fast moving situation” and advised those planning to holiday abroad to speak to their travel agents.

“ITAA members are monitoring the situation on behalf of their clients on a day to day, hour by hour basis on what is a fluid situation,” Mr Spollen said.

“We would ask that travellers ensure they have adequate travel insurance. Follow advice of local authorities on the ground and take all preventative measures as recommended,” he said.